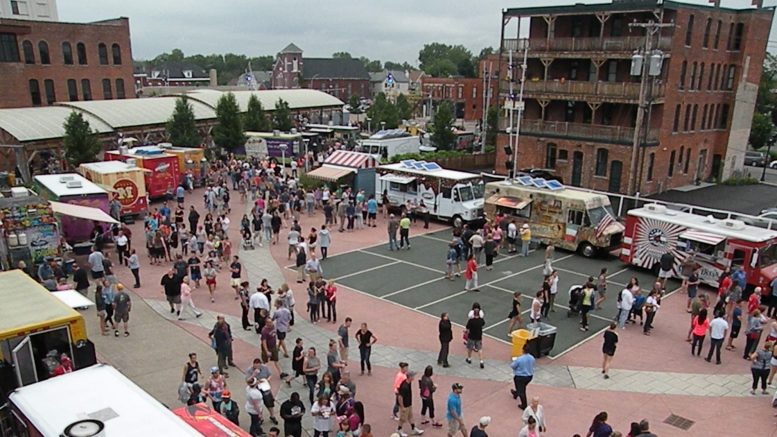 Like the reappearance of robins, the sight of food trucks filling Larkin Square is one of the first signs of springtime in Buffalo. This year, “Buffalo’s biggest dinner party” will once again begin earlier than ever, as Food Truck Tuesdays return to Larkinville for another six-month season starting April 11.

Every Tuesday into October — with the exception of July 4th — Larkin Square will welcome dozens of food trucks and a diverse lineup of live, local music. Beverages will be sold onsite, with colorful seating and hula hoops spread around the square; guests are welcome to bring their own seating. Each truck will offer at least one item certified as a Healthy Option by the Independent Health Foundation. Admission and parking are free thanks to presenting sponsor KeyBank and sponsor Independent Health.

The 2017 season welcomes a roster of more than 50 food trucks, 15 of which are new to the street since last season. Each week, Larkin Square will host up to 28 food trucks with additional trucks parked at Flying Bison Brewery (840 Seneca St.) in Larkinville. To round out the neighborhood-wide “dinner party,” the Hydraulic Hearth Restaurant & Brewery (716 Swan St.) will welcome diners to bring food purchased from the trucks into their beer garden, as will BFLO Distilling Co. (860 Seneca St.) in their newly-opened tasting room. With trucks driving from as far as Rochester, the wide variety of food and range covered by the fleet of trucks have helped the event become one of the largest and longest-running food truck events in the country.

With a 25-band live music lineup that jumps between genres each week, the majority of the musicians will make their Larkin Square debut, as upstarts such as Alex McArthur and Jacob Peter along with veterans including Nikki Hicks and Son Boricua join perennial favorites from The Rockaz to Zak Ward.

The KeyBank Live at Larkin Wednesday concert series will begin on June 7, with a lineup to be announced in April. For more information on Larkin Square including booking private events, please visit www.larkinsquare.com.