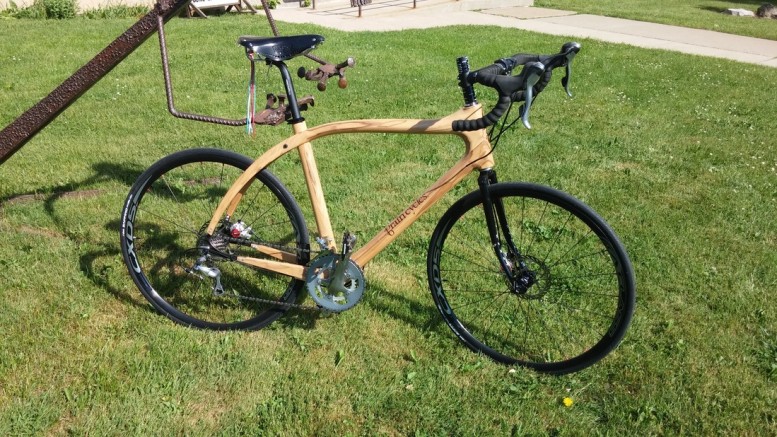 What do you look for when shopping for a new bike? According to Peter Johnson, avid cyclist and founder of Grain Cycles, there are a few main principles for a bike that make it desirable to ride: weight, stiffness, comfort, fit and overall design. It is this set of principles that inspired Johnson to put his love for biking and woodworking together and build a wood bike.

About two years ago, the 24-year-old woodworker began his role as an apprentice at his uncle Victor Marwin’s shop Against the Grain Woodworking in Niagara Falls, N.Y. A short time later, Johnson approached his uncle with an idea to create road bikes out of wood. 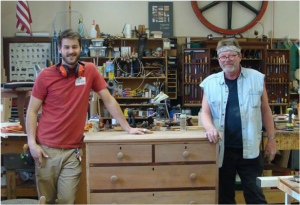 “Victor was not very confident that it was going to turn into much. That made it even more of a challenge,” Johnson said.

Marwin began working with wood as a little boy, building toys to play with when his parents couldn’t afford to buy him any. In the ’70s, he began working alongside the “best woodworkers in the world” at Kittinger Furniture Company. When his time there came to an end, and after a brief stint teaching the trade to high school students, he opened his own woodworking company. Not once in his over 40 years of experience and success did he think to create a bike.

“He pretty much enlightened me to the world of wooden bicycles,” Marwin added. “I didn’t know other companies existed – not many and none around here. After some trial and research and development his ideas came to fruition in the form of a wooden bike.”

“It was pretty heavy and wasn’t right from the start, so I started over,” said Johnson, who originally planned on being an engineer after graduating from West Seneca West Senior High School in 2009. He didn’t like engineering and graduated from Binghamton University in 2013 with a Bachelor’s of Science in Archeology, but is using what he learned as an engineering student to combine his love of woodworking and cycling.

What makes a wooden bike stand apart from the aluminum, carbon fiber or steel bikes? Take one out for a ride.

“They are so smooth and so comfortable,” Johnson said. “The wood absorbs all of the shock you’re picking up from the road surface.”

Though wood weighs slightly more than the other materials used to create bikes, it has just as good stiffness and even better durability.

“Wood has a better fatigue life than steel or aluminum,” Johnson said. For example, if a carbon fiber bike is chipped, the entire structure of the bike is compromised. If a wood bike is chipped, part of its finish will come off but the bike will remain strong. “It’s nearly indestructible as compared to these other materials.”

As for lasting in the rain, “your parts will rust long before the wood is damaged by water,” Johnson guaranteed.

Building a wood bike takes about 80 to 100 hours each, but the bikes are built to each customer’s specifications.

“It’s like a boutique electric guitar,” Marwin said. “You pick everything – color, wood species, parts – and it’s built specifically to your tastes which is very cool.”

“All of the wood is sustainably harvested,” Johnson added. “It’s all American hardwoods and all locally designed, built and sold.”

Grain Cycles and Against the Grain Woodworking are located in the Niagara Art and Cultural Center on Pine Avenue in Niagara Falls. To learn more, visit www.graincycles.com as well as their Facebook and Instagram accounts.