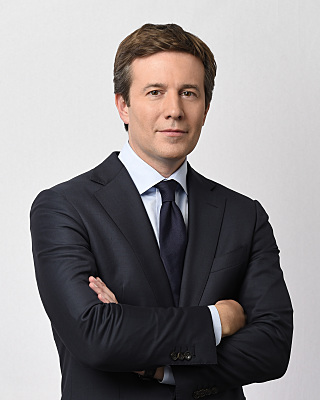 Glor, a Tonawanda native and co-host of CBS This Morning: Saturday, will discuss his career and the current state of the news industry among other topics with host Jacquie Walker of WIVB-TV. Viewers will be able to submit questions to Glor during the live show.

The fundraiser is scheduled for Tuesday, March 30 from 7:30 to 8:30 p.m. Tickets are $10 for BBA members and current students and $20 for non-members. Go to www.buffalobroadcasters.com to purchase tickets.

Glor joined CBS in 2007 and has traveled extensively covering stories around the world. He has been on the ground in the middle of many hurricanes, including Michael, Florence, Irma, and Superstorm Sandy. Glor has reported from the scenes of mass shootings in Pittsburgh, Pa.; Thousand Oaks, Calif.; Parkland, Fla.; Sutherland Springs, Texas; Santa Fe, Texas and Newtown, Conn., among others. He has covered wildfires across California for years.

As anchor of the “CBS Evening News” from December 2017 to June 2019, Glor helped lead the Network’s coverage of the 2018 midterm elections, the Supreme Court confirmation hearings for Judge Brett Kavanaugh, and two summits between President Donald Trump and Kim Jong Un of North Korea, in Singapore and Vietnam.

Visit www.buffalobroadcasters.com to purchase tickets and for more information.