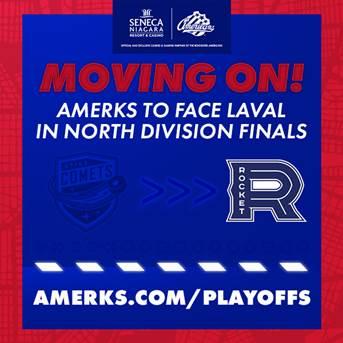 The best-of-five series is set to get underway with Game 1 in Laval on Sunday, May 22.

For the first time in 18 years, the Rochester Americans are moving onto the third round of the American Hockey League’s Calder Cup Playoffs, where they will meet the Laval Rocket in the North Division Finals after defeating the Utica Comets three games to two with a 4-2 win in Game 5 of their second-round series at Adirondack Bank Center.

The third-round series will mark the first-ever meeting in the postseason between the two teams, who previously met eight times during the 2021-22 regular season.

The best-of-five series is set to get underway with Game 1 in Laval on Sunday, May 22 at Place Bell. Rochester will host Game 3 on Wednesday, May 25, and if necessary, Game 4 on Friday, May 27 at The Blue Cross Arena.

Below is the full third-round schedule for the best-of-five North Division Finals between the fifth-place Amerks and third-place Rocket.

Amerks Calder Cup Playoff tickets are available for purchase either in person at The Blue Cross Arena Box Office, online at www.amerks.com/playoffs or by calling (585) 454-5335.

Amerks inducting Domenic Pittis into Hall of Fame in January