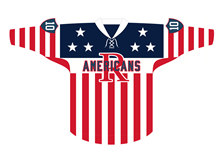 The Amerks will wear special throwback jerseys along with matching socks inspired by the 1996 Calder Cup-winning team.

The Rochester Americans announced the team’s festivities for its annual Hall of Fame Night, presented by Seneca Niagara Resort & Casino, scheduled for Friday, Feb. 8 when the Amerks host the Springfield Thunderbirds at 7:05 p.m. at The Blue Cross Arena.

Prior to the game, the team will induct defenseman Doug Janik and forward Steve Langdon into the Amerks Hall of Fame as the Class of 2019 during a pregame ceremony. Langdon, who will become the 64th member of the prestigious club, will sign autographs during the first intermission in the Amerks Hall of Fame area, while a limited number of autographed Janik items will also be available.

Janik spent five seasons patrolling the Rochester blueline from 2001 to 2006, establishing himself as one of the most dominant defensemen in franchise history. Janik recorded 91 points (18+73) over his five seasons with the club, ranking 31st all-time among Rochester blueliners, while also leading the Amerks to four straight playoff appearances. His 376 career games are the third-most of any defenseman and rank 14th all-time. He currently serves as an assistant coach with the Springfield Thunderbirds.

Langdon spent five of his six pro seasons in Rochester from 1974 to 1979, and much like Janik, helped the team to four straight playoff appearances, including a trip to the Calder Cup Finals in 1977. In 313 career games with the Amerks, Langdon scored 97 goals, ranking him 20th all-time, and added 87 assists for 184 points. He also recorded 14 points (3+11) in 35 postseason appearances.

The festivities begin on Friday with the Genesee Pregame Happy Hour, which runs from 6 to 7 p.m. in the Genesee Brew House Upper Atrium Bar, featuring live music from Tim Britt as well as $2 drafts of Genesee and Genesee Light.

The Amerks will wear special throwback jerseys along with matching socks inspired by the 1996 Calder Cup-winning team featuring the alternating red and white stripes and navy-blue shoulders. The six white stars that adorn the shoulders represent the team’s six Calder Cup championships. The chest features the word “Americans” centered in front of a large “R” while navy-blue shields, which pay homage to the franchise’s early years, will display the player’s number on the upper arms.

Fans will have the opportunity to purchase the jerseys through a silent auction held during the game on the upper concourse of The Blue Cross Arena. Following the game, the winners of the auction will be able to take the ice and be presented with a “jersey off the back” from the Amerks players.

In addition, the Amerks will be selling a limited number of special Mystery Pucks matching the look of the team’s jerseys that night and autographed by various Amerks players for $10 on the upper concourse during the game.

The Distillery to host annual Amerks ‘Meet the Players Party’