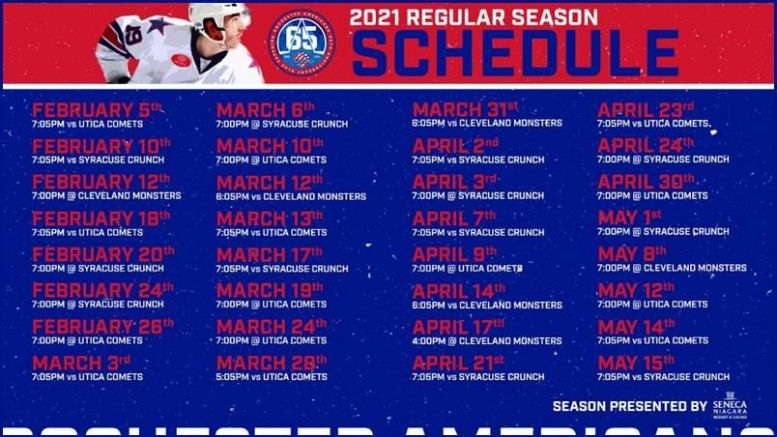 The Amerks will play an abbreviated 32-game schedule.

The Rochester Americans announced today their schedule for the 2020-21 American Hockey League regular season, presented exclusively by Seneca Niagara Resort & Casino. The Amerks will open their 65th AHL season – and 39th as the primary affiliate of the Buffalo Sabres – on Friday, Feb. 5 at 7:05 p.m. against the Utica Comets at The Blue Cross Arena.

The Amerks, who remain in the North Division of the Eastern Conference, will play an abbreviated 32-game schedule during the 2020-21 shortened season against only the Cleveland Monsters, Syracuse Crunch and Utica Comets. It will be the fifth straight year the Amerks play all their games solely against Eastern Conference opponents.

Rochester will face-off against North Division rivals Syracuse and Utica 12 and 14 times, respectively, with six more matchups against Cleveland to round out the remaining games.

Rochester will play half of its 16 home games on weekends, with five Friday home games, two Saturday home dates and only one Sunday home outing. The team will play the balance of its schedule with eight additional midweek games, including seven on Wednesday nights and one on Thursday, Feb. 18.

All home games against Syracuse and Utica will start at 7:05 p.m. this season except for Rochester’s lone Sunday contest on March 28 against the Comets, which will begin at 5:05 p.m. The three home matchups against Cleveland will start at 6:05 p.m.

The Amerks’ busiest months come in March and April with 10 games each. Rochester’s longest homestand of the season is a three-game stretch, which occurs twice in the month of March. The Amerks remain home for three straight between March 12 and March 17, including a set against Cleveland and Utica on back-to-back nights, before hosting all three opponents over a five-day span to close out the month. The team’s longest string of road games is a five-game trek from April 24 to May 12 featuring two games each against the Crunch and Comets as well as their final visit of the season to Cleveland.

The team’s most demanding portion of the schedule is a stretch of five games over a nine-day span in March.

Rochester spends the most time on home ice in March with six games within the friendly confines of The Blue Cross Arena during the month, including a season-long three-game homestand. Conversely, April has the Amerks playing the most road games in any month with five.

Rochester will have four back-to-back sets throughout the season, including one at home during the final weekend to close out the regular season.

Be the first to comment on "Amerks announce regular season schedule"