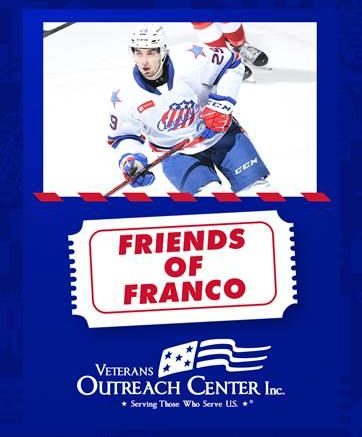 Rochester Americans forward Dominic Franco is spearheading a new ticket program in partnership with Veterans Outreach Center, a longtime partner and supporter of the Amerks.

As part of the “Friends of Franco” program, Franco will donate four tickets for every remaining Amerks 2021-22 regular season home game to Veterans Outreach Center. The tickets will then be distributed to local veterans and military families who work closely with the organization.

“It’s an honor and privilege to provide game tickets to our local veterans and their families,” said Franco, who’s currently in his second season with the Amerks after playing his collegiate hockey at Army. “As a graduate of West Point, I have an immense appreciation for the countless sacrifices made by the brave men and women that have served or continue to serve our great country.”

A native of Portsmouth, Rhode Island, Franco owns the distinction of being the first Army athlete to sign a professional contract in the sport of hockey since the U.S. secretary of defense endorsed a policy in November 2019, making it possible for exceptionally talented athletes who have graduated from a military service academy to pursue employment as professional sports athletes following graduation. As a result, Franco was permitted to delay his commissioning and subsequent service obligation to pursue employment as professional sports athlete.

“We are so appreciative to the Amerks organization for their continued support of military veterans and the Veterans Outreach Center,” said Executive Director Laura Stradley. “Moreover, we’re especially grateful to Dominic Franco for his patriotism and hard work at one of the nation’s most prestigious service academies and now for his support of our local veteran community. Well done!”

Justin Bailey to appear at Frontier Field this Friday 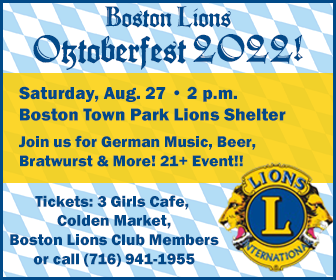