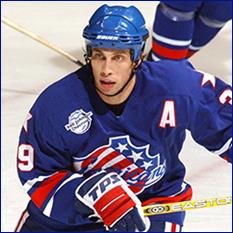 The Rochester Americans are pleased to announce that the team will induct forward Domenic Pittis into the Amerks Hall of Fame as the Class of 2020. Pittis was unanimously selected for induction by the Amerks Hall of Fame Committee and will take his rightful place in the prestigious club on Friday, Jan. 31 when Rochester hosts the Syracuse Crunch at 7:05 p.m. at The Blue Cross Arena on Seneca Niagara Resort & Casino Legends Night.

Set to become the 65th member of the exclusive club, Pittis quickly evolved into one of the franchise’s most prolific scorers during his three seasons in Rochester, reaching the 20-goal mark twice and recording at least 65 points on all three occasions. In 204 career games with the Amerks, Pittis produced 246 points, placing him among the top 20 forwards all-time in franchise history, and ranking 17th all-time with 171 assists. He also added 70 points (16+54) in 57 postseason appearances while leading the Amerks to the playoffs in each of his three seasons, including back-to-back trips to the Calder Cup Finals in 1999 and 2000.

“I’m extremely honored to be inducted into the Rochester Americans Hall of Fame,” said Pittis. “I played with so many great players, but it really was the group and the Amerks culture that made my time in Rochester so memorable.”

A year after breaking into the American Hockey League with the Syracuse Crunch, Pittis joined the Amerks for the 1998-99 campaign and assembled what would be his best season over his 19-year pro career. In 76 games with the Amerks, Pittis amassed an AHL-best 104 points on 38 goals and 66 assists, winning the John B. Sollenberger Trophy as the League’s top point-getter during the regular season while helping the Amerks to a franchise record 52 wins during the regular season. Rochester also set an AHL record for the fewest goals allowed with 176.

Pittis became just the sixth different player in team history to earn the honors and first to lead the AHL in scoring since Paul Gardner put up 112 points during the 1985-86 season. It was also the last 100-point performance by an Amerk in recent years.

That same season also saw Pittis accomplish the rarest of feats as he
appeared in two games in the same day. On March 28, 1999, Pittis helped the Buffalo Sabres to a 4-3 overtime win over the Pittsburgh Penguins, who drafted the Calgary, Alberta, native in the second round (52nd overall) of the 1993 NHL Draft, before returning to Rochester in time to notch two assists in the 3-2 loss to the Cincinnati Mighty Ducks later that same day. Since then, no other Amerks player has done it.

Pittis and the Amerks would advance to their first of two straight Calder Cup Finals later that spring, ultimately falling in five games to the Providence Bruins.

The following season limited Pittis to just 53 games due to injuries but was equally as productive, nonetheless. Despite missing the first 22 games, Pittis would rediscover his scoring touch and finish the year leading the Amerks with 48 assists and 65 points while leading Rochester back to the Calder Cup Finals. Pittis delivered a memorable performance during the postseason, scoring four goals and tying an AHL record with 26 assists in 21 playoff contests as Rochester fell to the Hartford Wolf Pack in six games.

After three years away from the organization, including two full seasons in the NHL with the Edmonton Oilers, Pittis made a return trip back to Rochester in 2003-04 for what would be he his final stint with the Amerks. Much like the previous two years, Pittis averaged more than a point per game, leading the team in assists (57) and points (77) and ranking second in goals (20) while serving as team captain. The Amerks returned to the postseason for the third time under Pittis, who added 19 points (5+14) in 16 games as Rochester advanced to the Western Conference Finals.

Pittis departed the organization the following year, ending his tenure in Rochester as the franchise’s all-time leader in playoff assists (54) and second in points (70). He also ranks sixth all-time among playoff leaders in games played (57) and seventh in goals (16).

He played the remaining nine seasons of his pro career in Switzerland, winning two league titles along the way as well as a Champions Hockey League championship. Pittis also excelled at the international level while abroad, helping Team Canada claim gold at the 2007 Spengler Cup.

Pittis announced his retirement following the 2012-13 campaign and is currently in his fifth season as an assistant coach with the Stockton Heat, the AHL affiliate of the Calgary Flames.

Fan can ‘Take a Shot with the Amerks’ this season