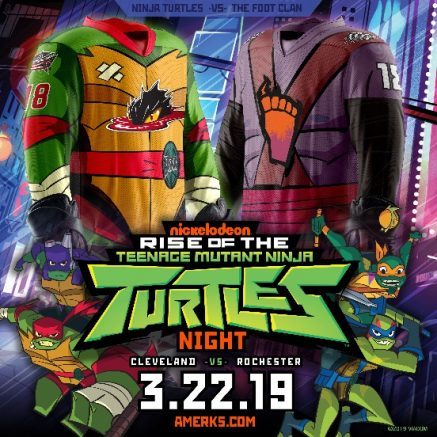 The promotional nights will take place in both Cleveland and Rochester.

The promotional nights will take place in both Cleveland and Rochester with both teams hosting Nickelodeon Nights within their respective home arenas over the course of the season. The Monsters, who will host the first event at Quicken Loans Arena on Wednesday, Dec. 26, will wear Teenage Mutant Ninja Turtle-themed jerseys while the Amerks will sport sweaters inspired by the Foot Clan, the primary antagonist and arch enemy of Leonardo, Donatello, Raphael and Michelaneglo throughout the Teenage Mutant Ninja Turtles franchise.

The North Division rivals will wear the same themed jerseys again on Friday, March 22 when the Amerks host the Monsters at The Blue Cross Arena.

The Foot Clan jerseys the Amerks will be wearing will be available for purchase through a silent auction held during the game in Rochester on the upper concourse of The Blue Cross Arena. Following the game, the winners of the auction will be able to take the ice and be presented with a “jersey off the back” from the Amerks players.

Be the first to comment on "Amerks, Monsters announce details for home-and-home Nickelodeon series"