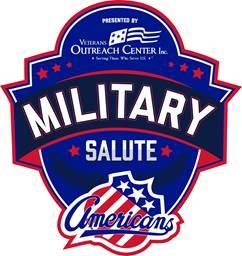 The team will wear military-themed jerseys Saturday against Toronto that will be auctioned off to benefit Veterans Outreach Center.

The Rochester Americans and Veterans Outreach Center have once again partnered to host Military Salute Night on Saturday, Jan. 14 when the Amerks face the Toronto Marlies at 6:05 p.m. at The Blue Cross Arena at the Rochester War Memorial.

“We are so excited to celebrate our 50th Anniversary year with the Rochester Americans,” said Veterans Outreach Center Executive Director and U.S. Army Veteran Laura Stradley. “Veterans Outreach Center engages daily with local veterans who have made great sacrifices in serving our nation. It is a testament to the Americans organization that they want to recognize those sacrifices and honor these courageous men and women by hosting an event like Military Salute Night. The entire staff and players alike take an interest in getting involved in our community and engage with both VOC and the veterans we serve directly. It is truly wonderful that the organization makes themselves so accessible.”

“It is always an honor for the Rochester Americans to partner with Veterans Outreach Center to host what has become our annual salute to the military,” said Amerks Vice President of Business Operations Rob Minter. “This is an event we take great pride in hosting each year as it gives us another opportunity to show our immense gratitude for the brave men and women in our community and in the U.S. Armed Forces who have served or are currently serving our country.”

The Amerks will again wear special Military-themed jerseys and matching socks as a tribute to the U.S. Armed Forces. Fans will have the opportunity to purchase the game-worn jerseys through an online auction on DASH, a sports-focused online auction platform and partner of the Rochester Americans. To access the auction, visit www.amerks.com/auction or text “DASH” to 66866, click on the download link and install DASH on your mobile device. Fans can then create their own personal profile and select the Amerks as their favorite team to start bidding.

The auction ends at 9 p.m. the night of the game on Saturday, Jan. 14.  Winners will be contacted directly. Proceeds from the jersey auction will be donated to Veterans Outreach Center.

The specialty jerseys the Amerks will wear are inspired by the region’s military involvement in the War of 1812. The designs pay tribute to Rochester’s small militia, “The Valiant 33”, and their defense of Port Charlotte against the British during the conflict, recognizing the parallels between those fiercely proud patriots and the current players. Rochester’s militia consisted of 33 men who were prepared to defend their homes, fellow citizens, and the United States military supplies which had been stockpiled in Rochester at the time.

The Amerks are offering all United States Military Veterans, Retired, Active Duty, Reserve and National Guard service members one complimentary ticket to the game. Veterans and Military Members can pick up their tickets for the game at Veterans Outreach Center, located at 447 South Ave. in downtown Rochester.

Justin Bailey to appear at Frontier Field this Friday