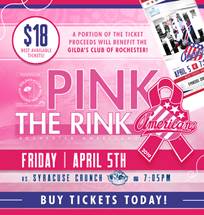 Pink the Rink Night is slated for April 5.

The fifth annual “Pink the Rink” Breast Cancer Awareness Night presented by Gilda’s Club Rochester is set to take place on Friday, April 5 when the Rochester Americans host the Syracuse Crunch at 7:05 p.m. at The Blue Cross Arena.

A portion of the proceeds from the game will be donated to Gilda’s Club Rochester, a non-profit organization committed to providing free networking and support groups, workshops, education and social activities for men, women teens and kids people of all ages affected by cancer.

“We’re thrilled to be able to partner with Gilda’s Club Rochester again this year in support of such a terrific cause,” said Amerks Vice President of Business Operations Rob Minter. “We look forward to hosting Pink the Rink Night each year as it gives us an opportunity to not only raise awareness but offer our endless support for those affected by this terrible disease.”

“We are thrilled to again be partnering with the Rochester Americans on this year’s “Pink the Rink” game,” said Melinda Merante, CEO of Gilda’s Club Rochester. “With so many people affected by cancer in Rochester, this is a fun opportunity to raise awareness; our community is so fortunate to have the Amerks as great ambassadors for this type of event.”

As part of the annual Pink the Rink game, the Amerks players will again wear special-edition jerseys to promote breast cancer awareness. Fans will have the opportunity to purchase these jerseys through a silent auction held during the game on The Blue Cross Arena concourse. Following the game, the winners of the auction will be able to take the ice and be presented with a “jersey off the back” from the Amerks players.

The Amerks will also be selling a limited number of special Pink the Rink-themed Mystery Pucks, autographed by various Amerks players, for $10 on the main concourse during the game.

Popular Amerks theme nights return throughout the month of March