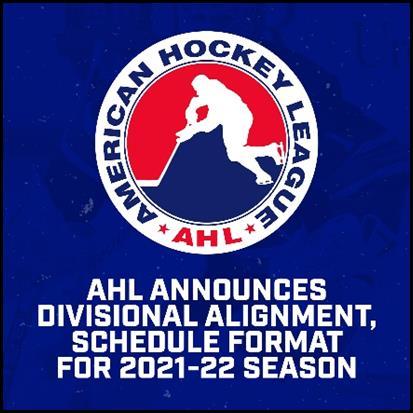 The Rochester Americans will remain in the AHL’s North Division.

American Hockey League President and CEO Scott Howson announced this week that the league’s Board of Governors has approved the following divisional alignment for the 2021-22 AHL season.

The Rochester Americans will remain in the AHL’s North Division, which will reduce to seven teams in 2021-22 following the departure of the Binghamton Devils and the return of the Cleveland Monsters, who played out of the Central Division last season. The Amerks will again be joined in the North Division by the Belleville Senators, Cleveland Monsters, Laval Rocket, Syracuse Crunch, Toronto Marlies and Utica Comets, who will begin their first season as the top development team of the NHL’s New Jersey Devils.

The AHL’s Board of Governors also approved a schedule unification plan that will see all teams play a 72-game regular season schedule beginning in 2022-23. As part of the plan, for the 2021-22 season, teams in the Atlantic, North and Central Divisions have the option of playing either 76 or 72 games, while teams in the Pacific Division will play 68 games. The Amerks will play a 76-game slate this coming season.

Additionally, there will be an increase in the number of teams qualifying for the Calder Cup Playoffs each year; details will be finalized and announced later in the offseason.

The complete American Hockey League schedule for the 2021-22 regular season will be announced at a later date.

Rochester will open its 66th season in the American Hockey League at home on Friday, Oct. 22 at The Blue Cross Arena.