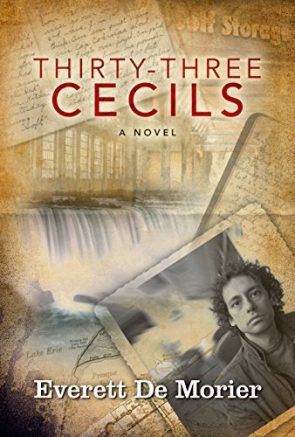 The film version of Thirty-three Cecils is being produced by Sunset River Productions out of Los Angeles and will begin shooting this fall.

Everett De Morier’s novel Thirty-three Cecils became a sleeper in the book world. It was published by a small press yet won the top fiction prize at The London Book Festival, was named book-of-the-year, became required high school reading and had the film rights optioned. And from 6 to 8 p.m. Thursday, June 16, De Morier will visit Dog Ears Bookstore, 688 Abbott Road, Buffalo, for a book-signing event!

The film version of Thirty-three Cecils is being produced by Sunset River Productions out of Los Angeles and will begin shooting this fall, mostly in Binghamton, with some scenes filmed in Niagara Falls. De Morier, along with producer Brian Esquivel, wrote the screenplay to the film in which Dustin Hoffman will play one of the significant characters.

What’s interesting about both the novel and screenplay is that they include places the author had been to, as well as a few he has not. When writing about a place he hadn’t been to, the author would research it then use that setting in the novel.

“In other words,” said De Morier, “I would steal it. I would look at maps, watch videos, read blogs and go through photos until I felt that I knew that specific place.” This was the case for The Wonderfalls Guest House on Spruce Street in Niagara Falls, which became the Trudea Youth Hostile in Thirty-three Cecils.

This youth hostel becomes the first place the character Dutch visits after leaving Binghamton. It is warm and welcoming and a window to different countries and people visiting Niagara Falls.

“This place is so cool,” the character Dutch says in the novel. “It’s like I moved in with another family except that each family member speaks a different language.”

Also on June 16, the author will finally get to see The Wonderfall Guest House firsthand and visit with Carroll Shultz-Reetz, the owner. De Morier is eager to spend some time at the hostel and hear more about its history and the city.