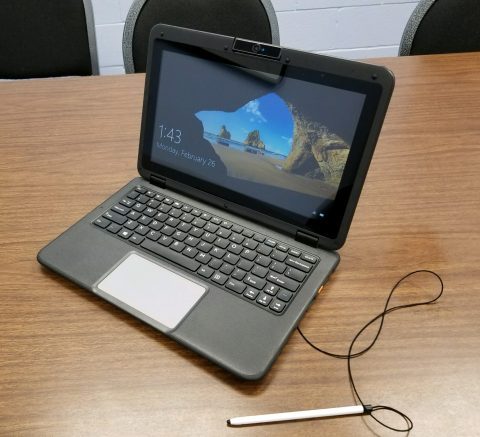 Having computers in classrooms has become the norm in 21st century society as technology continues to grow and become part of everyday life. Students have been able to utilize programs such as Word to type essays, PowerPoint to create presentations and the Internet for research.

This technology has allowed students to reach new heights … but what about the students who don’t have access to computers? This was a problem the alternative high school program in West Seneca Central School District was facing.

“I think the assumption is since the program is housed in the high school we have all the computers and resources the high school has access to,” shared Stephanie Wright, who coordinates the program. “One thing that is not globally known for people who don’t work in schools is when school districts have computers, those computers are unique to buildings and their budgets.”

The alternative learning program is for students between the ages of 16 and 20 years old. There is ongoing registration for the program, which currently consists of 13 students working towards taking their TASC test, the high school equivalency exam for a local diploma. Without computers, the students are given a pen and paper with limited access to the Internet.

Wright and her teachers attempted integrating tablets in the classroom to see if their students could work with them, but they were too difficult to use with the wireless settings in the building. That’s when the idea came to reach out to Bak USA, a social enterprise that builds mobile computers in downtown Buffalo.

Part of the application included getting approval from the district’s IT Department to ensure Bak USA’s computers would be compatible should they be donated. Wright met with Scott Firkins, chief microcomputer technical support specialist, who spoke to the company to get a better understanding of the computers and how they work. He deemed them acceptable and the application form was submitted. One week later, Wright found out the district won.

She and some of the alternative learning program teachers went downtown for a press conference to accept their prize. While there, Wright met one of the men she previously connected with over email.

“He said, ‘I want you to know we are so appreciative of the fact you reached out and made us aware. This is something we as a local company never really thought about,’” Wright shared. “They created this grant because of our emails that we sent out. A few other public schools won computers as well. It was moving.”

A total of 25 touch-screen tablet computers were donated at a value of $399 each. Around the time the donation was made, Microsoft employees were visiting the district’s after-school program so a dozen middle school students had the opportunity to test the new computers out while working on coding skills.

“Microsoft was excited to come in and see the computers,” Wright said. “They sell them at the Microsoft Store at the Galleria Mall, but they were excited to actually implement them in the classroom because it is a local product.”

The whole experience taught Wright a lesson in persistence. “We are very thankful to Bak USA for what they did. When it comes to the kids in our school district, it is worth being a pain and to keep asking. Now we can integrate more technology for the kids who need to learn in a different way.”