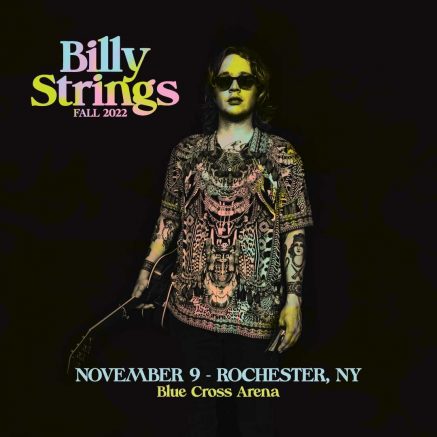 Creative Concerts is thrilled to present Grammy Award winner Billy Strings for one night only at Blue Cross Arena at the War Memorial in Rochester on Nov. 9.

Out now via Rounder Records, Renewal was produced by Jonathan Wilson and solidifies Strings’ position as a singular artist — one who honors the history of the music that inspires him while continually pushing it forward. With the record’s 16 tracks, Strings shares a more personal and honest perspective through his songwriting while incorporating his wide range of influences with elements of bluegrass, classic rock, metal, psychedelic music and more.

“In addition to some dazzling picking from Strings and his bandmates, there’s a heaviness to the chord progressions and lyrics that speaks to his love of metal,” said Rolling Stone.

Tickets go on sale to the public this Friday, July 1 at 10 a.m. on CCTix.com and www.ticketmaster.com.