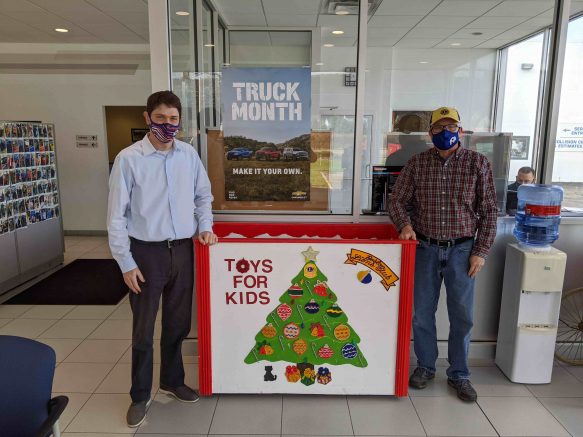 Members of the Boston Lions Club will be collecting new, unwrapped toys for children (newborn to age 14) in the Boston area.

Members of the Boston Lions Club will be collecting new, unwrapped toys for children (newborn to age 14) in the Boston area. The Lions have placed toy collection boxes at 3 Girls Cafe, located at 8373 Boston State Road, and at Cappellino Chevrolet, 9000 Boston State Road. Toys will be collected through Saturday, Dec. 12. For more information, contact Lion Tom Herrmann at 481-1991 or fasttalker2020@gmail.com.

Lions International, founded in 1917, is one of the largest community service organization in the world with 1.4 million members in 200 countries. The Boston Lions were formed in 1969 by business owner Milton “Bud” Wittmeyer, owner of the Valley View Inn in Patchin. The local club began with 22 charter members; retired attorney Joseph Terrizzi is the last of the original members.

Over the years, more than 180 men and women have been members of the Boston Lions Club. The club bought the Boston Rescue Squad its first resuscitator in 1973, and continues to provide the community with a variety of service including a medical equipment loan closet, scholarships and a Christmas food program. The local organization has also supported the Boston Patriots Little League, Guide Dog Foundation for the Blind, Sightless Bowlers and many other service-related organizations and projects.

A total of $250,000 has been raised by the Boston Lions Club since its founding, through such fundraisers as snowmobile and bicycle races, Octoberfest, refreshment stands, chicken and spaghetti dinners, pancake breakfasts, bottle and can drives, yard sales, pull tabs, raffles, Monte Carlo nights and more. The Boston Lions Club also built the shelter at Boston Town Park and later deeded it to the town.