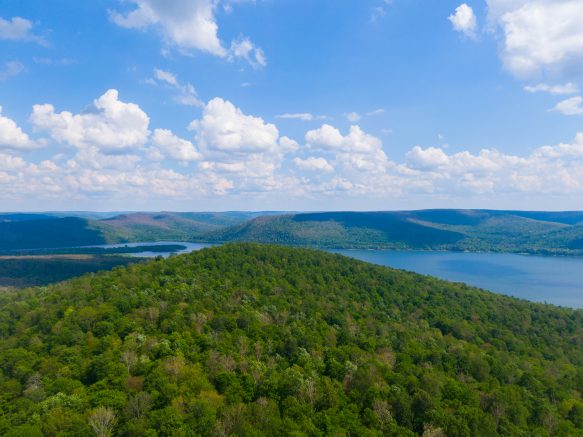 The Western New York Land Conservancy and the Friends of the Allegany Wildlands are pleased to announce that the community has reached their fundraising goal to save the Allegany Wildlands. Located near Allegany State Park in Cattaraugus County, this spectacular 200-acre forest is home to a rich diversity of plants and animals. Once purchased, it will be permanently protected and become part of the Land Conservancy’s planned Western New York Wildway.

This past year, the Land Conservancy and the Friends of the Allegany Wildlands developed an ambitious plan to save the Allegany Wildlands. During the summer, they received three challenge gifts totaling $310,000 — which, thanks to hundreds of individual and foundation donors, the community matched. In December, New York State Office of Parks, Recreation and Historic Preservation awarded the Land Conservancy $347,000 toward the purchase of the property, successfully concluding the campaign (EPF Grant #218790). The property has been owned by the Sluga family since the early 1800s when they purchased it from the Holland Land Company. Generations of their family have been its stewards ever since. Though the Sluga family has decided to sell their land for the next chapter of this forest’s story, they wanted it protected — and for good reason.

The Allegany Wildlands has a unique geological history for our region. During the last ice age, the glaciers never covered this forest, keeping intact an ancient plant community. As recently as 150 years ago, the forest teemed with massive American Chestnut trees, which had dominated eastern forests for 40 million years but were wiped out by a blight. To this day, six American Chestnuts that are more than 40-feet tall survive at the Allegany Wildlands, some of which are producing seeds. Underneath the forest canopy, black bears and bobcats roam the ridges and ravines. Majestic Bald Eagles soar overhead, colorful songbirds nest in the tall trees, and playful river otters search for fish in the nearby reservoir.

Nestled between Allegany State Park and South Valley State Forest, the Allegany Wildlands is a significant link in a future Western New York Wildway: a connected corridor of protected lands that stretches from the vast forests of northern Pennsylvania to the Great Lakes, through to the Finger Lakes, the Adirondacks and beyond. The Wildway will allow plants and animals to migrate across the land as they once did, it will allow those that have disappeared from our region to return home, and it will allow those in need to move around to new homes as climate changes.

This is one reason why the New York State Office of Parks, Recreation and Historic Preservation capped the campaign by awarding the Land Conservancy a grant. “The Allegany Wildlands’ represents an incredible opportunity for the Land Conservancy and its partners to begin implementing their Western New York Wildway concept,” said Mark V. Mistretta, Western District Director of NYS Parks. “This ambitious plan will help New York meet its climate-mitigation goals and will keep our state at the vanguard of a broad, nationwide effort to conserve valuable land for future generations.”

“One of the most rewarding aspects of our work is seeing our community rally around a common goal,” said Nancy Smith, Executive Director of the Land Conservancy. “The Allegany Wildlands is an astonishing forest that’s already connected to 7,000 acres of protected state land, making it a huge step toward our long-term goal of establishing the Western New York Wildway. We couldn’t be more thrilled to save it permanently.”

That connectivity to the Wildway spurred the Gallogly Family Foundation, last August, to donate $200,000 toward a challenge grant to kickstart the final fundraising push. Kasey DeLuke of the foundation, also a Land Conservancy board member, said: “We are extraordinarily pleased to assist the Land Conservancy in their efforts to save the Allegany Wildlands. Our goal, like theirs, is to keep the momentum for landscape-scale conservation of the type envisioned by the Western New York Wildway going strong for years to come. We believe the Wildway is a gamechanger for our region.” The preserve will be named after the foundation’s co-founder, Janet Gallogly.

The Land Conservancy names director for The Riverline

Be the first to comment on "Community reaches fundraising goal; Western New York Land Conservancy to purchase the Allegany Wildlands"