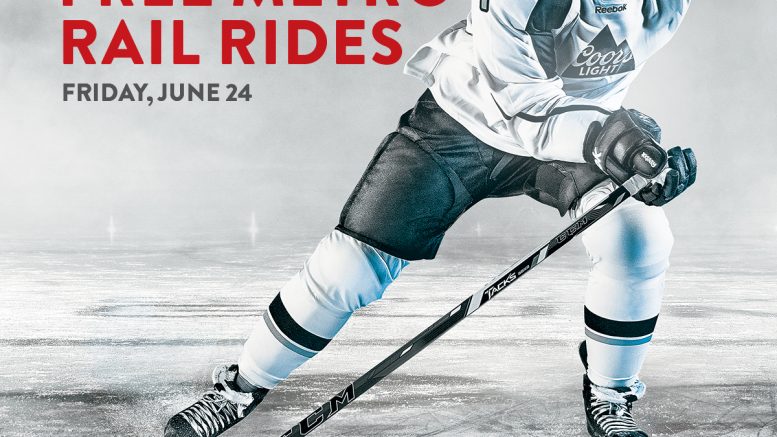 Coors Light, official sponsor of the National Hockey League, is teaming up with the Niagara Frontier Transportation Authority Metro and the Buffalo Sabres to provide hockey fans with free and safe transportation to the 2016 NHL Draft. In partnership with Certo Brothers Distributing, Coors Light Free Rides will be available on all NFTA light rail routes on opening day of the NHL Draft, Friday, June 24, beginning at 5 a.m.

“Coors Light has enjoyed a long-standing relationship with the NHL,” said Diane Wagner, alcohol responsibility manager at MillerCoors. “Providing Free Rides during one of the most exciting events of the season is just another way we’re helping hockey fans celebrate responsibly.”

“Public transportation is more than just a convenient way to travel, it’s a way for Buffalo to stay safe during sporting events and local festivities,” said Kim Minkel, executive director at the NFTA. “We are pleased to continue our partnership with Coors Light on their Free Rides program and to serve as the designated driver for thousands of fans on the opening day of the NHL Draft.”

In addition to taking a Free Ride, hockey fans can pledge to be a designated driver at the NHL Draft Fan Fest at Canalside. Coors Light is partnering with TEAM Coalition on Friday, June 24 from 4 to 10 p.m. to promote the use of designated drivers to remind hockey fans to stay safe all season long.

“Buffalo is a great community with great people. We want our neighbors and guests to travel and celebrate safely during this year’s NHL Draft festivities, including Fan Fest,” said Dennis Hartman, chief operating officer at Certo Brothers Distributing. “We’re proud to be a part of this important partnership to keep our city safe.”

“Thousands of hockey fans will be in Buffalo to celebrate the newest members of their favorite NHL teams,” said Ken Martin, senior vice president of community and diversity programming for the NHL. “Through our partnership with Coors Light, these fans have free and safe options to celebrate responsibly.”

“We take pride in our loyal fans,” said Mike Gilbert, vice president of administration for the Buffalo Sabres. “We want to remind them and our guests here for the NHL Draft to stay safe by making smart choices during the weekend festivities.”

Since its inception in 1987, MillerCoors has provided more than five million Free Rides to people nationwide. Free Rides is an important part of MillerCoors overall commitment to helping prevent drunk driving.

Fans can get detailed route and schedule information by texting “FREE RIDES” to 90464.