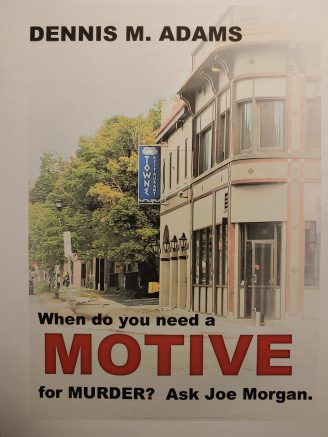 A West Seneca resident, Adams delves deep into his many years of experience as an Army intelligence analyst and detective to create the characters for his first novel.

A West Seneca resident, Adams delves deep into his many years of experience as an Army intelligence analyst and detective to create the characters for his first novel. He holds a bachelor’s degree in criminal justice from Buffalo State College.

With a typical murder investigation, most homicide detectives would be satisfied if they could prove how the homicide occurred, who committed the murder, what weapon was used, and establish where and when the crime occurred. In “Motive,” that would not be enough for Joe Morgan, the retired homicide chief whose grandson, Sean, was intentionally run down and killed by a hit-and-run driver. To further complicate matters, Joe’s son, Mike, Sean’s father, is also a lieutenant in the police department. The police department’s finding that the killer is deceased has all but closed the investigation. However, it had been unable to find a motive for the murder, and this of course leaves open the possibility that either Mike or Joe may have been the actual intended target. Until the motive is discovered, there is a chance that whomever directed the killing could strike again.

Free coffee and food discounts will be offered during the April 17 event. For more information, please visit den-adams.com or follow Motive by Dennis M. Adams on Facebook for frequent updates. The book is also available on amazon.com for those who cannot make the upcoming event.