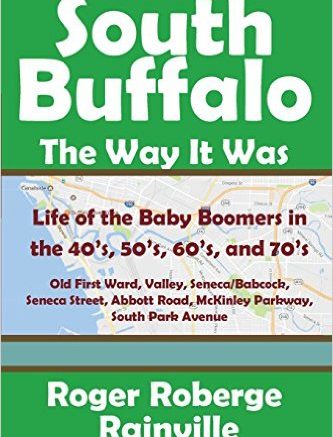 Roger Roberge Rainville, author of “South Buffalo – The Way It Was,” will visit the nonprofit Dog Ears Bookstore & Café for a book-signing event from noon to 2 p.m. Saturday, April 1. The community bookstore is located at 688 Abbott Road in South Buffalo.

This book is full of nostalgia, interesting facts, names and stories about people, places and events from neighborhoods including the Old First Ward, the Valley, Seneca-Babcock, Seneca Street, Abbott Road, McKinley Parkway and South Park Avenue, going back to the 1940s, ’50s, ’60s and ’70s. It should appeal to people of all ages, especially those connected to the Baby Boomer generation.

“It’s a look back in time when life was simpler,” said the author. “It’s about an era when most people there were tied to a parish and lived in safe, family-oriented neighborhoods. It’s about the way life was when most families were the same, status-wise, and how each area was self-sufficient with regards to having every imaginable store and business for their daily needs. It’s about a time when individuals were proud to say I’m from the Old First Ward, the Valley, Seneca-Babcock, Seneca Street, Abbott Road, McKinley Parkway or South Park Avenue.”

Born in Granby, Québec, in 1946, the fifth of 10 children, Rainville’s family moved to Welland, Ontario in 1955 and subsequently to Orchard Park in 1959. In April of 1960, the family moved to Altruria Street in South Buffalo.

He attended School #29, Holy Family and South Park High School, received his bachelor’s degree in secondary education (French and Spanish) from Buffalo State College and attended the University of Buffalo where he received his master’s degree in American Studies. After college, he worked as a French and Spanish teacher at Canisius High School and part-time at Medaille College.