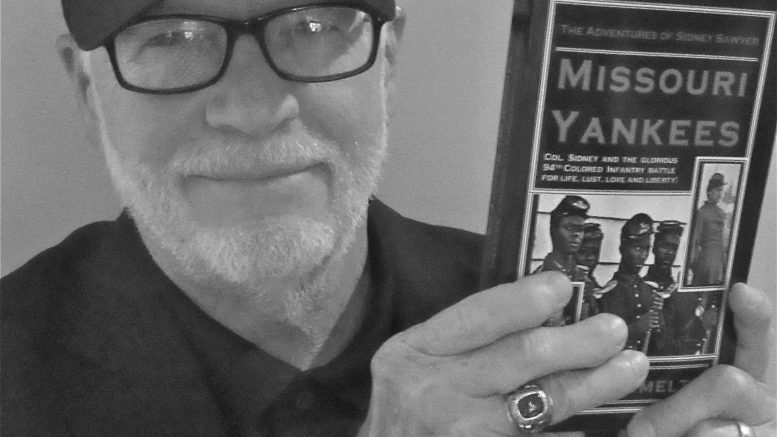 “The Adventures of Sidney Sawyer” series of books is a saga which will include six novels covering the Civil War from Bleeding Kansas to Appomattox. In his Delaware Avenue mansion in 1910, brooding over the city’s outpouring of grief at the passing of Samuel Clemens, ancient General Sidney Sawyer, the Civil War’s greatest scoundrel, fortifies himself with cheap bourbon, licks his pencil and begins his outrageous memoirs. Mark Twain’s cast of lovable rascals, including Tom Sawyer’s not-so-lovable little snitch of a brother, Sidney, are of military age when America divides North from South. Little Siddy grows to be the very image of a soldier (except for the honor part), and when America needed heroes, young Lieutenant Sawyer had the whiskers for it!

In “Missouri Yankees,” black knights in Yankee blue fight for freedom through the bloody sands of Carolina as Colonel Sidney Sawyer battles in the glare of a calcium sun. From Britain to the Red River bayou, and  Charleston to Chattanooga, our ever reluctant hero brawls, battles, spies on and skedaddles from homicidal widows, Frenchified hookers, and the Mighty Wadmalaw, “King of the Runaway Slaves.” With Liberty (the drummer boy who isn’t what he seems), Sawyer fights for the life of the Union against a treacherous giant. Marching to the beat of Liberty’s drums, the Ninety-fourth Colored Infantry wins glory as The Missouri Yankees!

For more information on Dog Ears Bookstore, located at 688 Abbott Road, please call 823-2665 or visit their website at http://dogearsbookstore.org/. You can also follow Dog Ears Bookstore on Facebook for frequent updates.