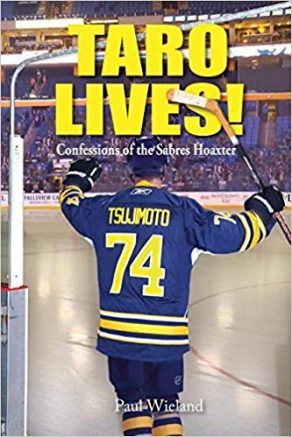 Taro, the off-the-cuff imaginary player, sets Wieland off on the pursuit of hoaxes for two decades.

Wieland began his professional career as an award-winning journalist for two metropolitan daily newspapers, the Buffalo Courier-Express and the Buffalo Evening News. He was next a public relations executive with General Motors, until, in 1970, he became public relations director of the Buffalo Sabres where he worked on-air in radio and TV. As executive producer, he spent 25 years working as a director and producer of Sabres TV, as well as on NBC, Sportschannel America and worldwide hockey telecasts.

He left hockey to run a Massachusetts public television station for six years, also beginning a long association as a director or producer of college basketball. Later, instead of retiring, he joined the faculty of the Jandoli School of Communication at St. Bonaventure University, teaching various writing courses, sports TV production and on-air announcing. He is the author of three non-fiction sports books and a comedic novel on the sports business.

“Taro Lives: Confessions of the Sabres Hoaxter,” traces the author’s beginnings as a grammar school newspaperman to his early days in the news business, where he pulled his first gags and met up with his hero, a fellow reporter who was an accomplished hoaxer.

Wieland cooperates in one big hoax and then realizes he’d like to pull off his own, but with the caveat that his wouldn’t do harm, just provide laughs. After a stint in public relations with General Motors, Wieland finds his element in professional hockey and sports TV.  He joined the Buffalo Sabres in August 1970, and the Sabres were his sandbox and petri dish for the next quarter century. Along the way he invented a Japanese hockey player named Taro Tsujimoto, soon a legend in the National Hockey League.

Taro, the off-the-cuff imaginary player, sets Wieland off on the pursuit of hoaxes for two decades, resulting in some of the strangest news announcements and sports television ever presented.

He and his  wife, Betsy, currently live in Great Valley, N.Y.