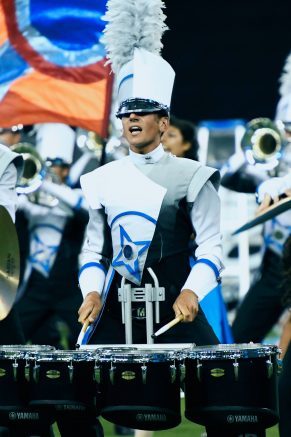 As a prelude to the Aug. 5 Drums Along the Waterfront Tour of Champions competition taking place at New Era Field, the Legends Drum & Bugle Corps from Kalamazoo, MI will be making a tour stop in Gowanda July 24-25. Arriving in preparation for a competition in Johnsonburg, PA, the Legends will be utilizing Gowanda Central School’s facilities for their rehearsals.

With musical-athlete membership 150 strong, the Legends compete in Drum Corps International’s (DCI) Open Class level. Established in 2006 under the auspices of the Legends Performing Arts Association, the Legends have been recognized with an impressive string of Most Improved Open Class Corps awards in 2009, 2012 and 2015. The corps has finished as an Open Class Finalist every year since 2009 and recently was an Open Class Bronze Medalist in 2016 and 2017.

“When the corps come to town they live a life of luxury sleeping on gym floors for several hours after getting the majority of their sleep on buses as they travel through the night,” quipped Jack Gaylord Jr., President of Drums Along the Waterfront. Upon waking they will rehearse up to 10 hours a day. While the corps will divide into sections to rehearse throughout the day, they will come together as one ensemble in the evening utilizing Hillis Field. Their final rehearsal block on July 25 will run from 5 to 7:30 p.m., with the corps performing a full run through of their show at the end of the rehearsal as a thank you to the Gowanda community.

“The Legend’s visit provides a great educational opportunity,” stated Gaylord. “Those in attendance will witness the dedication, discipline and talent of the performing membership, and they are being instructed by some of the top music educators in the country. The instructional staff is always willing to answer any questions the public might have, and the performing members love to talk about their drum corps experience.”

Gowanda has a rich history of hosting world-class drum corps, including the Bluecoats (Canton, OH) the Madison Scouts (Madison, WI), and last year the Crossmen (San Antonio, TX). “We are appreciative of Gowanda Central School and the Gowanda community for being such gracious hosts,” Gaylord stated. “We would not be able to bring the world-class youth activity with its economic impact to the WNY area without the cooperation of schools such as Gowanda.”

The top 10 corps in the world will be competing in the 21st anniversary edition of Drums Along the Waterfront Tour of Champions, Aug. 5 at 6 p.m. at New Era Field in Orchard Park. With 41 world titles among the 10 competing corps, included in the field are the reigning and 18-time world champion Blue Devils (Concord, CA) and the 2016 world champion Bluecoats (Canton, OH). Tickets for the event can be purchased at ticketmaster.com or by calling (800) 745-3000. Kids 12 & under are half price and there are also senior and military discounts. For group discounts, please call Dave Robbins at 949-1262.

The Chicago Authority to perform fundraiser at Gowanda’s Historic Theater