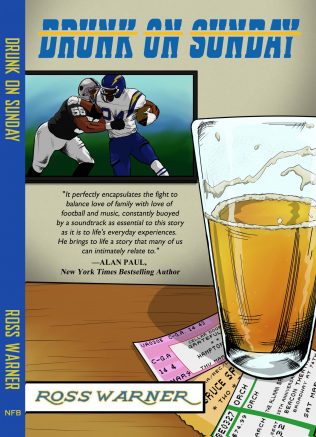 Drunk On Sunday is a coming of age tale that is both familiar and unique.

NFB Publishing of Buffalo is proud to announce the release of Drunk On Sunday by author Ross Warner.

Twenty-five years in the making, after almost as much time living it, Drunk On Sunday is a coming of age tale that is both familiar and unique. It’s a story for anyone who tried to find themselves on the road to responsibility without losing sight of who you are. From Westchester to Rochester to the Upper East Side to the East Village, Drunk On Sunday chronicles the story of Rob Gross and his battles against adulthood. Like so many, Gross discovers that his biggest obstacle isn’t finding someone to share his life with, but figuring out how to deal once he does.

Even if you didn’t come of age in the ‘80s and ‘90s or have never been consumed with your favorite movie, team or band, you’ll enjoy this look at the rites of passage that so many of us must go through.

Warner lives on Long Island with his wife Samantha and their two amazing kids, Sarah and Aaron. He maintains his audio archive of every Grateful Dead concert ever played even though his kids make it unlikely that he’ll have time to listen anytime soon. Warner has been writing about the three pillars of popular culture — television, music and film — since high school, and his work has appeared in such magazines as American Heritage, Cinema Retro, Hittin’ The Note, Heeb, and Glide. As a writer, he is probably best known for his long-running blog on the San Diego, now Los Angeles, Chargers.

Justice Is Coming, founded in 1995, landed him in the Pro Football Hall of Fame in 2002. His football writing has also been featured in Sports Illustrated’s “Si Online” and Blitz Magazine. He was the featured columnist on the Chargers for Bleacher Report and he currently contributes pieces on pop culture to Book & Film Globe.

Warner’s work on his other major life obsession, the Grateful Dead, has been similarly featured in both books and magazines. Drunk On Sunday is his first book. For more information, please visit www.drunkonsunday.com.

‘Fewer Than 9’ is the latest book release from NFB Publishing

Wrath, by Joshua Yox, is latest release from NFB Publishing