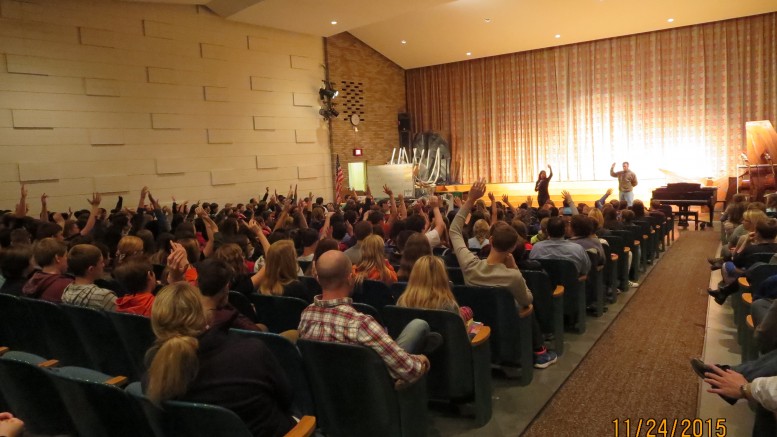 “Students are so curious by nature at this age,” Principal Matthew Bystrak said, and his point was proven at the beginning of the assembly.

Jessica Hutchings from Kids Escaping Drugs asked the students to raise their hands if they knew someone who drinks alcohol or uses some form of drugs. Most of the students’ hands went up. Their average age is 14 years old.

“The point of today’s assembly is not to lecture you guys or tell you what you should or should not do. It is for you to learn from the mistakes of others and help someone you care about who is using.”

Hutchings then introduced Peter Goretti, a 23-year-old who grew up with what he called the “picture-perfect family” – a mom, dad, sister and chocolate lab. His father was successful and owned three bars in the community … but he was also an alcoholic. In eighth grade, Goretti’s parents got divorced.

He went back and forth asking the students in attendance questions including if they too had parents who were divorced, or if they knew what alcoholism was.

“Being an eighth grader is tough,” he shared. “When my parents got divorced, it tore me apart. There was so much I didn’t understand.”

He continued his story, saying how when he was their age he was drinking with his dad at his bar to have quality father/son time. As time continued he went on to use drugs, and felt even more lost when his father died of a heart attack.

“On July 9, 2009, I went to Renaissance House. I was only 16 years old,” he said. The students were compelled by his story, and Hutchings opened the floor to the students to ask questions about Goretti’s recovery, how he dealt with his addictions, what rehab was like and more.

“You ask really good questions for being eighth graders,” he said with a smile, and he answered every question he had time for.

“Raise your hand if you’ll make the right decision because of what you heard today,” Hutchings asked. Almost every hand in the room went up.

“You’ll be faced with decisions growing up,” Bystrak said before having the students return to their classrooms. “It’s easy to say you’ll make the right choices here, but it’s more difficult when you’re at a party with friends. It’s not okay for someone at your age to be drinking or using drugs, and don’t cover up for friends who are. If you need help, there are people in this school to be a support for you.”

As students were being dismissed, some walked over to Bystrak, Hutchings and Goretti to personally thank them for the assembly and for the wise words they shared.

“I love making a difference for kids,” Hutchings said. “Even if it’s just once kid, it’s worth it.”

Be the first to comment on "Educating students on substance abuse"