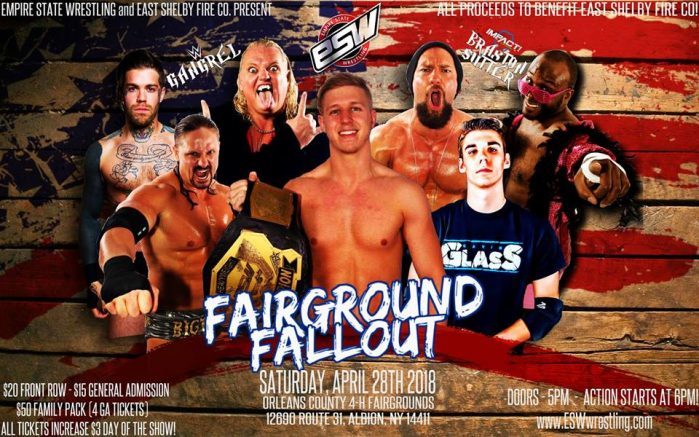 Gangrel is best known for his tenure in World Wrestling Entertainment, which included being the leader of “The Brood” faction that also consisted of Edge and Christian. The trio were  temporarily part of The Undertaker’s “Ministry of Darkness” group. He partnered with Matt and Jeff Hardy to form “The New Brood” as well.

Sutter’s appearance at “Fairground Fallout” comes of the heels of nearly capturing the ESW Heavyweight Championship from Kevin Bennett. After the match, a very frustrated Sutter shockingly took his frustrations out physically on Bennett and threw a table and chair at ringside. Sutter is set to face Rochester’s “Captain” Nick Ando.

Delaney has made numerous appearances with ESW over the last few years. At ESW’s last event, he and his partner Cheech challenged for the ESW Tag Team Champions against the reigning champions Oliver Street Express and The Fraternity in a triple threat match. Delaney will face ESW stalwart Brandon Thurston at the Albion event.

ESW promotes eight shows a year, primarily held at the St. Johnsburg Fire Hall in North Tonawanda, boasting crowds of over 400 fans. Larger “super show” events have been held at the Kenan Center in Lockport and the Frontier Fire Hall in Niagara Falls, drawing crowds up to 1,000.