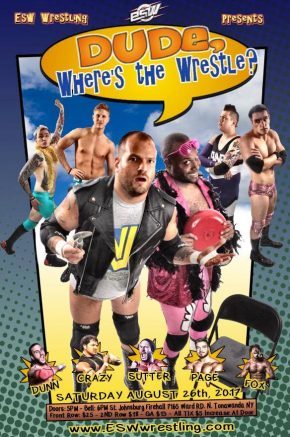 Former WWE and Extreme Championship Wrestling (ECW) star Super Crazy, WWE star Colin Delaney, plus current television wrestling stars Braxton Sutter and A.R. Fox are scheduled to appear at the event. Doors open at 5 p.m. with a bell time set for 6 p.m. Tickets are $20 for second row and $13 for general admission. All tickets increase $5 at the door.

Along with his stints in WWE and ECW, Super Crazy also wrestled prominently overseas, including his home country of Mexico for Lucha Libre AAA Worldwide and numerous Japanese promotions. He will partake in a triple threat match against Lucha Underground star A.R. Fox and North Tonawanda’s Kevin Bennett. Fox and Bennett faced each other in a highly praised single match three years ago. Including Super Crazy to the mix ensures this will be a “must-see” bout.

Colin Delaney is known for his run in WWE in which he worked closely with hardcore wrestling superstar Tommy Dreamer. He now extensively wrestles throughout the Northeast independent circuit with his partner Cheech in the tag team “To Infinity & Beyond.” Delaney is set to challenge R.J. City for the ESW Heavyweight Championship. City retained the title last show in a rematch against former champion Bill Collier in controversial fashion.

After extending his winning streak with a victory in tag team action with Kevin Bennett at the last event, West Seneca native Braxton Sutter is scheduled to face returning top independent star J.T. Dunn. Dunn will be looking for his first win in ESW after previously facing Bennett earlier this year.

Collier will take on Buffalo’s Brandon Thurston to determine the next No. 1 contender for the ESW Heavyweight Championship. The two wrestled each other earlier this year in a bout that exhibited some of the hardest hits ever witnessed at the St. Johnsburg Fire Hall.

In the other title bouts, Rochester native Coconut Jones will defend the ESW

Tonawanda, boasting crowds of over 400 wrestling fans who come to cheer the good guys and boo the bad guys of the sport. Larger “super show” events have been held at the Kenan Center in Lockport and the Frontier Fire Hall in Niagara Falls, drawing crowds of up to 1,000.

Founded in 2002, ESW is run by Brett Stymus of Lockport. Over half of the performers involved in ESW reside in the Western New York area. For more information, please visit www.eswwrestling.com.