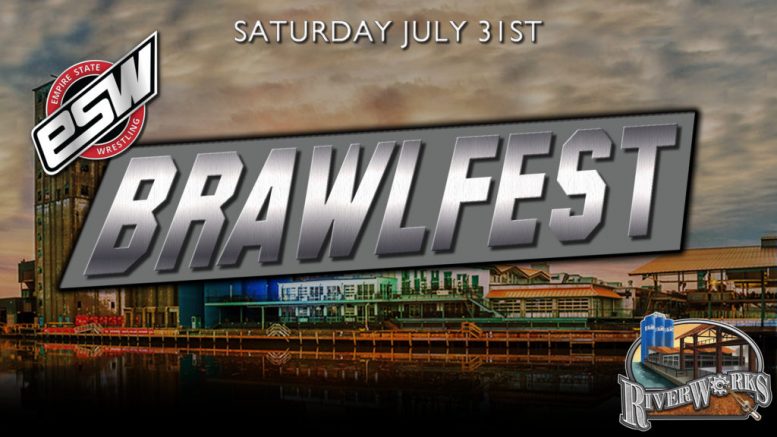 ESW will continue its tradition of presenting the best pro wrestling talent from around Western New York.

After a 16-month hiatus from live events, Empire State Wrestling (ESW) will make its return and will also debut at a new venue in an impressive fashion.

Empire State Wrestling will present “Brawlfest” on July 31 at Buffalo RiverWorks. This will be ESW’s first time holding an event at RiverWorks and will be the first pro wrestling event open to the general public in the City of Buffalo since the beginning of the COVID-19 pandemic.

Several major wrestling events previously ran at RiverWorks including events hosted by World Wrestling Entertainment’s NXT, Ring of Honor and Every Time I Die’s “TID the Season” rock and wrestling Christmas show. Thus when “Brawlfest” takes place on July 31, ESW will join the ranks of these nationally recognized promotions in running at one of Western New York’s premier entertainment destinations.

“Brawlfest” will also be the first ESW-branded event in the City of Buffalo in 16 years — when it presented “Explosion de Lucha Libre” at the Holy Cross Center on Sept. 17, 2005.

ESW will continue its tradition of presenting the best pro wrestling talent from around Western New York. “Brawlfest” will feature former ESW Heavyweight Champions “The Remix” Kevin Bennett, “Big Time” Bill Collier and “The Patron Saint of Professional Wrestling” Brandon Thurston. Fan favorites ESW Interstate Champion Frankie Feathers, “None of a Kind” Anthony Gaines, “Invincible” Vince Valor and To Infinity & Beyond (ex-WWE star Colin Delaney and ex-ROH star Cheech) will be in action. There will also be several of the top independent wrestling stars from around the Northeast U.S. at the event. Check out ESW’s social media pages for future special guests and match announcements over the upcoming weeks.

General Admission tickets are $20 and are available on ESW’s website (ESWwrestling.com). First and second row tickets are sold out. Doors open at 5:30 p.m. with a bell-time of 7 p.m.

Prior to the start of the event, ESW will host its second ever tailgate party. For $10, fans can get 10 dunk tank throws, which will feature several of ESW’s top villains, plus 25 percent off all other Buffalo RiverWorks attractions that day such as the ropes course, kayaks, silo climbing and the zip line.