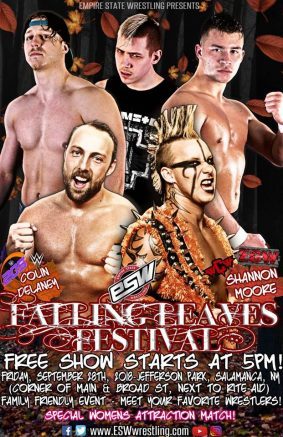 ESW will return to the Falling Leaves Festival in Salamanca on Friday, Sept. 28.

Empire State Wrestling (ESW) will return to the Falling Leaves Festival, Jefferson Avenue Park, Salamanca, on Friday, Sept. 28. The event is free of charge and will be located near the corner of Main and Broad streets, next to Rite Aid. This family friendly event stars at 5 p.m.

ESW promotes eight shows a year, primarily held at the St. Johnsburg Fire Hall in North Tonawanda, boasting crowds of over 400 fans. Larger “super show” events have been held at the Kenan Center in Lockport and the Frontier Fire Hall in Niagara Falls, drawing crowds up to 1,000.