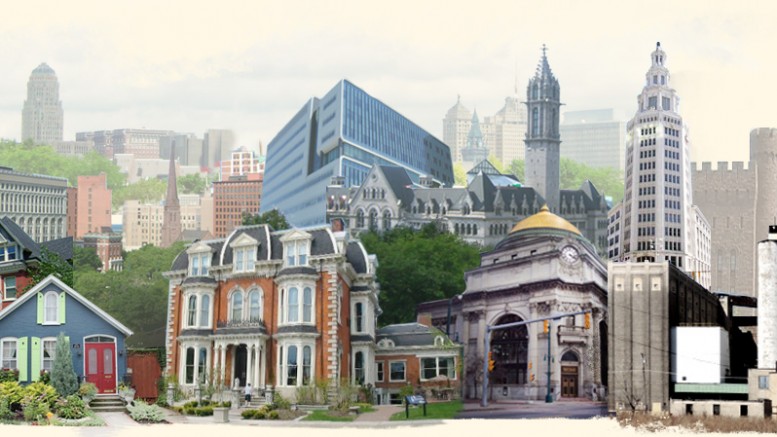 Unique and exciting tours highlighting Buffalo’s history, art and architecture are being offered through Explore Buffalo throughout the month of April.

How well do you think you know Buffalo’s history? Join Explore Buffalo on April Fool’s Day for the only time you will hear Explore Buffalo docents give a tour that is only half true! As we walk through downtown on this happy hour tour, guides will keep you guessing with some stories that are true but unbelievable, mixed with some tall tales of their own creation. Keep track on your scorecard along the way, and if your ability to sniff out lies is the best of the bunch, you’ll win a prize!

St. Mary’s School for the Deaf, established in Buffalo in 1853 as the first academic school for the deaf in the country, was relocated from Edward Street to its current location on Main Street in 1898. This two-hour walking tour highlights the beautiful architecture of this historic building and offers fascinating information about the history and culture of deaf people in the Buffalo area. The tour also offers a glimpse into the current world of educating deaf and hard of hearing students in the 21st century.

Highlights of the tour include original woodwork from 1898, stained glass windows in the former chapel, the school’s cherished museum which houses a wealth of artifacts and photographs from throughout the decades at St. Mary’s, and a brief meet and greet with a few of the school’s residential students, which comprise approximately 30 percent of the current school population. Join Explore Buffalo for a one-of-a-kind tour in one of Buffalo’s iconic buildings!

This tour meets at St. Mary’s School for the Deaf at 2253 Main St., Buffalo. Enter the driveway from Main Street to use the parking lot which is behind the buildings; the main entrance faces the parking lot and is up a flight of stairs to the right of the bridge.

Join Explore Buffalo for a tour of the only rowing boathouse designed by Frank Lloyd Wright! Originally designed by Wright in 1905 for the University of Wisconsin, the Boathouse was never built until its construction in 2007 in Buffalo along the shore of the Black Rock Channel. This was one of Wright’s favorite designs, as evidenced by his inclusion of the Boathouse in his now-famous Wasmuth Portfolio.

Today the boathouse is being used for its original purpose as an active rowing facility, providing a unique opportunity to see one of Wright’s designs being used as originally intended. On the tour, you’ll learn about why it was never constructed in Wisconsin, and how it came to be built in Buffalo.

The tour includes both the exterior and interior of the Boathouse, providing an in-depth look at a masterpiece of Prairie Style design. While on the tour, enjoy spectacular views of Lake Erie, the Niagara River and the Canadian shore from the Boathouse, and be sure to bring your camera!

Meet at the Boathouse at 1 Rotary Row, Buffalo. Take Porter Avenue west, and immediately after crossing the I-190 expressway, turn right at the Fontana Boathouse sign. Follow the driveway back to the Boathouse, where there is ample on-site parking.

At the turn of the 20th century, Buffalo was the eighth largest city in America and the city’s businesses, organizations and citizens had the financial resources to hire the best architects and craftsmen and use the finest materials available. See signature works by some of America’s greatest architects on this downtown walking tour, and learn about the prominence of Buffalo on a national scale at the turn of the 20th century. Buildings included as part of this tour include:

Building interiors are featured whenever possible, but access is not guaranteed due to building availability which can change with short notice (such as during funeral services at the cathedrals).

Meet at the Visit Buffalo Niagara Visitor Center in the Brisbane Building, at the corner of Washington and Clinton streets across from the Hotel Lafayette. Two-hour metered parking is available on Washington Street and other nearby streets, or the nearest public parking ramp is the Adam Ramp at Washington and Eagle streets, one block away ($2 per hour). The nearest Metro Rail station, Lafayette Square, is also one block away.

Join Explore Buffalo for a downtown walking tour of some of the best examples of the Beaux Arts style in Buffalo! Popular in the late 19th and early 20th century, Beaux Arts, which translates as “Beautiful Arts” and began in Paris, is characterized by elaborate detail and ornamentation, with many classical influences. The buildings seen on this tour exemplify Buffalo at the turn of the 20th century, when the city was the eighth largest in America and hosted the Pan-American Exposition. Many were designed by prominent local architectural firms, including Green & Wicks and Esenwein & Johnson.

On this 90-minute tour, you will see exteriors and interiors of commercial buildings built in the Beaux Arts style and learn about their history (note that more interiors are accessible on weekdays than on weekends). Many of these buildings have been meticulously restored in recent years to meet current needs, including the Electric Tower and Market Arcade.

This tour meets at Spot Coffee at 227 Delaware Ave., at the corner of Chippewa Street. Two-hour metered parking is available on Delaware Avenue and other nearby streets, or private parking lots are available – the closest is on Delaware Avenue, next to Spot Coffee. The nearest Metro Rail station, Fountain Plaza, is three blocks away. Street parking downtown is free on weekends.

At the end of the 19th century, Buffalo was a major American city in the forefront of technological progress. It was a busy inland port and a railroad hub with heavy industry and state-of-the-art electricity – all of which brought great wealth to the city. These economic and technological developments culminated in 1901 when Buffalo hosted a spectacular world’s fair, the Pan-American Exposition.

Experience Buffalo through the eyes of the narrator of Lauren Belfer’s historical novel, City of Light, which is set in Buffalo at the dawn of the 20th century.

The home of two presidents, Millard Fillmore and Grover Cleveland, Buffalo has also played host to many American presidents for important speeches and other occasions, the most infamous being President McKinley’s visit to the Pan-American Exposition in 1901 that ended tragically with his assassination. Some of the presidential stories in Buffalo are often told, while others are less widely known. Join Explore Buffalo on this tour to learn about five presidents who are particularly prominent in Buffalo history.

Meet at the Visit Buffalo Niagara Visitor Center in the Brisbane Building, at the corner of Washington and Clinton streets across from the Hotel Lafayette. Two-hour metered parking is available on Washington Street and other nearby streets, or the nearest public parking ramp is the Adam Ramp at Washington and Eagle streets, one block away ($2 per hour). The nearest Metro Rail station, Lafayette Square, is one block away.

For more information and to make reservations, please visit www.explorebuffalo.org or call 245-3032.