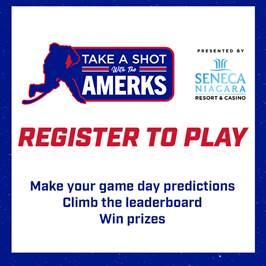 The Amerks open their 65th season in the American Hockey League.

The Rochester Americans announced today that the team has partnered with Seneca Niagara Resort & Casino for the “Take a Shot with the Amerks” promotion during the upcoming season.

Each Monday between now and the end of the season, contestants will receive an email containing a link with a series a of questions pertaining to that week’s Amerks home games. Every correct answer is worth one chip. At the end of each month, the contestant with the most chips will receive a Seneca Niagara Resort & Casino Prize Pack. Fans are only limited to one monthly prize pack but can still win the grand prize by remaining an active participant over the course of the entire promotional period.

Contestants must be members of the Amerks 2020-21 database to participate.

The Amerks open their 65th season in the American Hockey League at 7:05 p.m. when they host the Utica Comets at The Blue Cross Arena. All the action will be carried live on The Sports Leader 95.7 FM/950AM ESPN Rochester as well as AHLTV. Rochester’s home opener will also be televised live locally on CW Rochester.