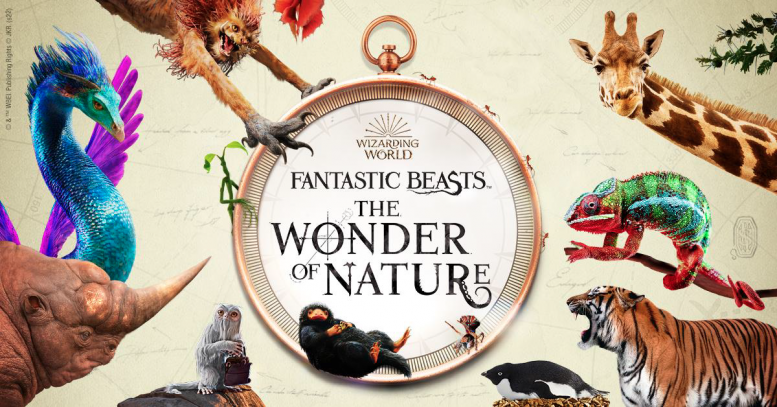 Tickets go on sale to the public beginning May 5.

This June, the ROM (Royal Ontario Museum) in nearby Toronto will be the first stop on an international tour of Fantastic Beasts: The Wonder of Nature, the acclaimed exhibition created by Warner Bros. Themed Entertainment and the Natural History Museum in London where it originally debuted. Visitors will be able to explore the natural wonders of the animal world and the mythical creatures they inspired, juxtaposing animal species from nature with the magical creatures that inhabit the Wizarding World. Fantastic Beasts: The Wonder of Nature will be on display at ROM from June 11, 2022, to Jan. 2, 2023.

Following in the footsteps of Fantastic Beasts’ fictional Magi-zoologist Newt Scamander, visitors embark on an adventure into the wild where objects are not always what they seem and the creatures on display can be endlessly surprising. Visitors journey to a place in time where some people believed that unicorns roamed the earth, merpeople swam beneath the waves and sea monsters attacked ships. On display are an array of fascinating objects, including real animal specimens and their astonishing fictional counterparts, alongside immersive digital installations, costumes and props from the Fantastic Beasts and Harry Potter films.

“Fantastic Beasts: The Wonder of Nature lives at the intersection of natural history and pop culture, deftly exploring the connections between the real and the imaginary,” says Josh Basseches, ROM Director & CEO. “In doing so, it reminds us of the extraordinary beauty and diversity of the natural world — and the urgent need to protect it.”

“Visitors in London truly loved Fantastic Beasts: The Wonder of Nature and we are delighted that ROM will be the next venue on the exhibition’s global tour. For an exhibition that has been a hugely successful collaboration between many partners, it seems only fitting to be working alongside yet another wonderful institution,” says Dr. Douglas Gurr, Director of the Natural History Museum, London. “Visitors will explore the magical creatures of the Wizarding World and see the abilities they share with those in the natural world and how these creatures can be just as fantastic. We hope visitors in Toronto will be inspired by the great Newt Scamander and Museum scientists to protect the future of our planet and the creatures we share it with.”

“The natural world around us is both familiar and exotic, from the beginning of life on Earth through eons of evolution and extinction,” says Dr. Kevin Seymour, vertebrate palaeontologist and curator for the ROM engagement of Fantastic Beasts: The Wonder of Nature. “As we study and learn more about nature, we can connect this knowledge with past myths about some incredible living creatures. For visitors, the exhibition beautifully combines the kind of work we do at ROM while also firing our imagination about truly magical, mythical creatures.”

Tickets go on sale to the public beginning May 5.

Be the first to comment on "Fantastic Beasts: The Wonder of Nature coming to ROM "