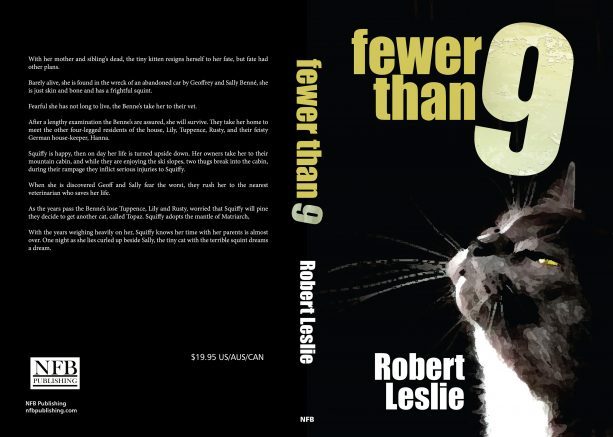 NFB Publishing announces the release of “Fewer Than 9” by author Robert Leslie.

With her mother and sibling’s dead, the tiny kitten resigns herself to her fate, but fate had other plans. Barely alive, she is found in the wreck of an abandoned car by Geoffrey and Sally Benné, she is just skin and bone and has a frightful squint. Fearful she has not long to live, the Benné’s take her to their vet.

After a lengthy examination, the Benné’s are assured she will survive. They take her home to meet the other four-legged residents of the house: Lily, Tuppence, Rusty and their feisty German housekeeper, Hanna.

Squiffy is happy, then one day her life is turned upside down. Her owners take her to their mountain cabin, and while they are enjoying the ski slopes, two thugs break into the cabin, and during their rampage they inflict serious injuries to Squiffy. When she is discovered, Geoff and Sally fear the worst as they rush her to the nearest veterinarian who saves her life.

As the years pass, the Benné’s lose Tuppence, Lily and Rusty. Worried that Squiffy will pine, they decide to get another cat, Topaz. Squiffy adopts the mantle of matriarch.

With the years weighing heavily on her, Squiffy knows her time with her parents is almost over. One night as she lies curled up beside Sally, the tiny cat with the terrible squint dreams a dream.

The author, Robert Leslie, was born in Southern Africa. He spent several years working as a rigger for a South African shaft sinking company on the copper belt of Northern Rhodesia (Zambia). He returned to the Republic when Zambia gained independence. A year later he joined a construction company in Southern Rhodesia (Zimbabwe). While working in the bush he had a fleeting encounter with the Selous Scouts, which inspired him to write this and other stories. Jackie Hangman was his debut novel, the first in a trilogy involving Sion Michael. Leslie now lives in the Southern Highlands of New South Wales, Australia, with his wife and their two dogs.

Leaving Jackson Wolf is the latest from NFB Publishing and author P.A. Kane