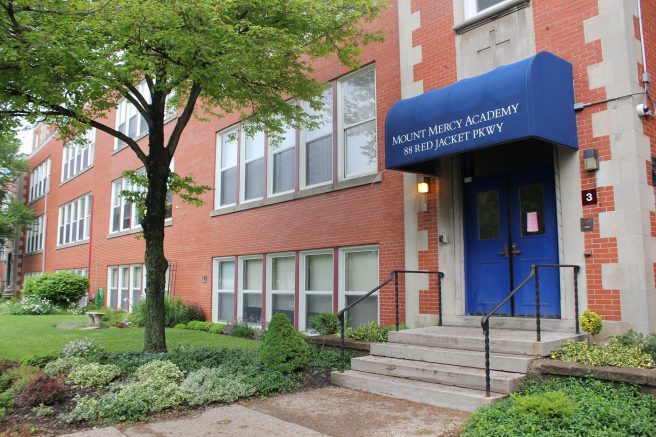 Mount Mercy Academy will honor five deserving individuals at its twentieth annual Mercy Honors Dinner. The dinner will be held on Thursday, Nov. 7, with a cocktail hour at 6 p.m. followed by dinner at 7 p.m. at The Columns Banquets.

Two alumnae will receive the Catherine McAuley Distinguished Alumna Award and two individuals will be honored with the Spirit of Mercy Award. In addition, a long-tenured member of the Mount Mercy faculty will receive the Mercy Devotion Award.

Mary Ann Murphy, Class of 1980 and Erin Sobkowski, Class of 1995 have been selected to receive the Distinguished Alumna Awards. This award honors alumnae who have distinguished themselves as women of faith, knowledge, integrity and compassion. The woman who is honored with this award reflects the legacy and mission of Catherine McAuley, the Foundress of the Sisters of Mercy, in all aspects of her life, family, community and career.

Murphy, a resident of South Buffalo, completed her bachelor of science and master’s degree in nursing at The State University of New York at Buffalo. She began her career at Mercy Hospital as a candy striper and has worked there in some capacity ever since. After completing her nursing degree, she began working in the Neonatal Intensive Care Unit, advancing to become the director of the Maternal Child Unit at Mercy Hospital, where she has served for over 35 years. In 2012, Murphy received the Nurse of Distinction Award for Mercy Hospital. She enjoys teaching and has overseen clinical nursing student rotations for many years for Trocaire College, Niagara Community College and the State University of New York at Buffalo. Murphy is also a key connection between Mount Mercy Academy and Mercy Hospital within the school’s internship program through the Academy of Science and Healthcare. She is married to Steven Pardee.

Sobkowski is a graduate of both The State University of New York at Buffalo and its law school. She currently works for the NYS Division of Human Rights which is responsible for enforcing the NYS Human Rights Law. This law prohibits discrimination in employment, education, housing and public accommodations, among other areas. Sobkowski, a Dunkirk resident, is married to Matthew Mancuso and is mom to beautiful twins Genevieve and Jack. Genevieve was born with Down syndrome. Following Genevieve’s birth, her parents became advocates and leaders in the Down syndrome community. They, along with friends, started a not-for-profit organization called 21 Connect, an education and advocacy group for individuals with Down syndrome. Sobkowski has also played a role in bringing another Down syndrome nonprofit to Buffalo. She serves on the start-up committee for GiGi’s Playhouse Buffalo, a facility that will provide social, employment and academic support to people with Down syndrome of all ages to help them integrate and succeed in the community. GiGi’s Playhouse is due to open this fall.

Douglas F. Lum and Mary Travers Murphy will be honored with the Spirit of Mercy Award. This award is presented to individuals who demonstrate commitment and dedication to their community in both their professional and personal lives. They are truly ministers of Mercy who “live justly, act in tenderness and with humility journey with their God” (Micah 6).

Longtime Orchard Park resident Travers Murphy is Chief Executive Officer of the Family Justice Center of Erie County. Under her leadership, the Center has expanded its reach from downtown Buffalo by establishing satellite offices in the northern and southern suburbs, Grand Island and a drop-in office at Harvest House Ministries on the East Side of Buffalo. The center provides comprehensive services to help clients and their children break the cycle of abuse and live free from domestic violence. She is no stranger to serving the public as evidenced by her career choices. Throughout her career, Travers Murphy has received numerous awards from entities at the local, state and national level. In 2015, she was honored by the U.S. Congressional Victims’ Rights Caucus during National Crime Victims’ Rights Week with the Ed Stout Memorial Award for Outstanding Victim Advocacy. She is married to John Murphy, the “Voice of the Buffalo Bills” and is the mother of two and grandmother of one.

South Buffalo’s Kathleen “Kate” Coughlin Lynch, Class of 1976, will receive the Mercy Devotion Award. The Mercy Devotion Award is presented to a faculty or staff member at the Academy who has served as an inspiration for, and has earned the respect and admiration of students and colleagues over the years.

Lynch is a dedicated and beloved educator at Mount Mercy Academy, serving the school for the past 25 years. Her loyalty to the school is evident every day and has earned her respect from colleagues, parents and students. Kate and Michael Lynch have three children: Patrick, Megan ’05 and Molly ’09.

Lynch began her teaching career at St. Ambrose and St. Agatha schools and she began teaching at Mount Mercy Academy in 1994. She served as athletic director from 1996 to 2005. In this position, Lynch was instrumental in the establishment of a girl’s golf league within Western New York. This league has permitted girls at both Catholic and public schools to compete in golf and obtain college golf scholarships. She has been the golf coach at Mount Mercy for many years. Lynch is always enthusiastic and instills teamwork, fair play and camaraderie in her students. Many students credit their decision to attend Mount Mercy on meeting Lynch and learning about the athletic programs at the school.

Lynch is a member of the New York State American Alliance for Health, Physical Education, Recreation and Dance. In 2015, she was awarded the Western Zone Teacher of the Year by the Alliance.

Alumnae, family and friends are all invited to attend this year’s dinner. All proceeds will benefit the Mount Mercy Academy Alumnae Scholarship Fund. For further information or to make reservations, please contact alumnaerelations@mtmercy.org. Online reservations can be submitted through the Mount Mercy Academy website, www.mtmercy.org. The specific information may be found under the Alumnae tab under the section titled Mercy Honors. Patrons and sponsorships are still available.  Please contact alumnaerelations@mtmercy.org.