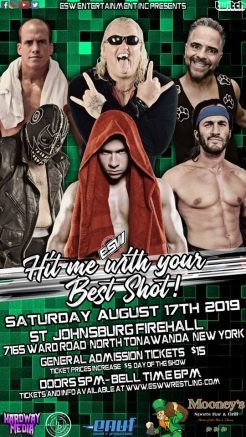 Former World Wrestling Entertainment star Gangrel will be in action.

Pre-sale general admission tickets are $15. Tickets increase $5 day of event. Front and second row tickets are sold out. Doors open at 5 p,m, with bell-time at 6 p.m. Hit Me With Your Best Shot will be recorded for ESW’s streaming service partners.

ESW shows are held throughout the calendar year, primarily at the St. Johnsburg Fire Hall in North Tonawanda, boasting crowds of over 400 fans. Larger “super show” events are held at the Kenan Center in Lockport and the Frontier Fire Hall in Niagara Falls, drawing crowds up to 1,000. ESW also runs on an annual basis outside the Buffalo metropolitan area in cities such as Salamanca and Albion.