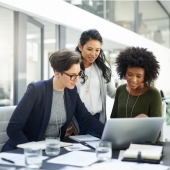 An initial public offering (IPO) is the first public sale of stock by a private company. Companies tend to schedule IPOs when investors are feeling good about their financial prospects and are more inclined to take on the risk associated with a new venture.

Thus, IPOs tend to reflect broader economic and market trends. And not surprisingly, 2017 was the busiest year for the global IPO market since 2007.

Company insiders who have been waiting for the opportunity to cash out may have the most to gain from an IPO. The higher the price set on IPO shares, the more money the company and its executives, employees, and early investors stand to make.

Nevertheless, the IPO process is important to the financial markets because it helps fuel the growth of young companies and adds new stocks to the pool of potential investment opportunities.

Newer, smaller companies have traditionally used IPOs to raise capital for expansion. However, some companies are relying on private capital to fund their early growth and development, so they can wait longer to test public markets. These companies often become larger, more mature, and more valuable before they are publicly traded.

This trend may help explain why the amount of money raised through IPOs has increased over the past decade, even as the number of new IPOs has waned. From 2007 to 2016, the number of corporate IPOs averaged 164 per year, down 47 percent from the previous decade. But average annual IPO proceeds rose 82 percent over the same period to $284 million.

A privately held company with an estimated value of $1 billion or more is often called a “unicorn,” and it’s estimated that there are now more than 200 of them in the technology sector alone.

Since the term was first coined in late 2013, unicorns have received most of the media’s attention, even though they still make up a relatively small part of the IPO market. The proceeds of 18 unicorn IPOs accounted for 5 percent of the capital raised from 2014 through 2016.

When IPO share prices shoot up on the first day of exchange trading, it’s referred to as a “pop.” A significant first-day gain may suggest that investor demand for the company’s shares was underestimated. Of course, this doesn’t mean that the company will outperform its peers in the long run.

One catch is that it is often difficult to obtain “allocated” stock. Investors who don’t have the opportunity to buy shares at the offering price — the price at which insiders are selling to the market — can buy the stock after it starts trading on the exchange. However, much of an IPO’s pop can take place between its pricing and the first stock trade. This means investors who buy shares after trading starts often miss out on a large part of the appreciation.

Investors who buy IPO shares on the first day might even pay inflated prices because that’s when media coverage, public interest, and demand for the stock may be greatest. Share prices often drop in the weeks following a large first-day gain as the excitement dies down and fundamental performance measures such as revenues and profits take center stage.

A young company may have a limited track record, and an established one may have to disclose more information to investors after it becomes publicly traded. If you’re interested in the stock of a newly public company, you should have a relatively high risk tolerance because shares can be especially volatile in the first few months after an IPO. You might even consider waiting until you can evaluate at least two quarters of earnings.

The return and principal value of all stocks fluctuate with changes in market conditions. Shares, when sold, may be worth more or less than their original cost. Investments offering the potential for higher rates of return also involve a higher degree of risk.

Insurance services offered by Georgetown Capital Group, which is independent of Royal Alliance Associates, Inc., with separate ownership, and is not registered as a broker-dealer or investment advisor.

This message may contain confidential information and is intended for use only by the addressee(s) named on this transmission.

Broadridge Investor Communication Solutions, Inc. does not provide investment, tax, or legal advice. The information presented here is not specific to any individual’s personal circumstances.

To the extent that this material concerns tax matters, it is not intended or written to be used, and cannot be used, by a taxpayer for the purpose of avoiding penalties that may be imposed by law. Each taxpayer should seek independent advice from a tax professional based on his or her individual circumstances.

I’ve recently changed my legal name. Do I need to change my name on my Social Security card?

Should I loan my child money for a down payment on a house?

What is a rollover IRA, and do I need one?

Be the first to comment on "Going public: An IPO’s market debut may not live up to the hype"