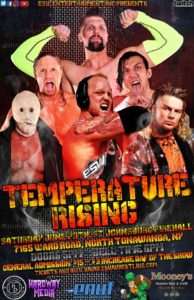 ESW shows are held throughout the calendar year, primarily at the St. Johnsburg Fire Hall in North Tonawanda, boasting crowds of over 400 fans. Larger “super show” events are held at the Kenan Center in Lockport and the Frontier Fire Hall in Niagara Falls, drawing crowds up to 1,000.

Ex-WWE stars to wrestle in Salamanca