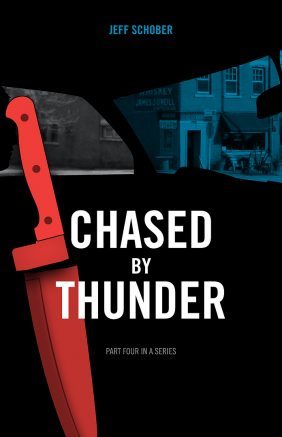 NFB Publishing has announced the release of its latest book, Chased By Thunder by local author Jeff Schober.

Schober has several books to his credit, including Undercurrent; Broken and Profane; Boneshaker; Faces and Fingertips; Growing Up Gronk​; Bike Path Rapist (with Detective Dennis Delano​); What a Country, This America (the biography of Hans Kullerkupp​); and Sabres — 26 Seasons in Buffalo’s Memorial Auditorium (with Ross Brewitt).

​”We think our father murdered our mother,” a woman tells police in Chased By Thunder. Twenty-eight years earlier, young housewife Donna Burgard was stabbed to death. No killer was captured, although her husband was the prime suspect. Now, as the victim’s grown children request a fresh investigation, Detective Mark Bennett is plunged into murky shadows of the past. Can the truth still be uncovered?

Deftly weaving between 1984 and 1956, Chased By Thunder is a fast-paced story that may be read as a standalone novel. It is the final book in a four-story arc that includes Broken and Profane, Boneshaker, and Faces and Fingertips.

Schober earned a journalism degree from Bowling Green State University and a master’s degree in humanities from the University at Buffalo. As a journalist, he has written for several Western New York publications. He also taught American history and Shakespeare in an alternative education high school for several years before becoming an English teacher at Frontier High School. In 1998, he was part of the National Endowment for the Humanities summer program, Teaching Shakespeare, at the Folger Shakespeare Library in Washington, D.C. He has acted in plays around Buffalo and in St. Catharines, Ontario. In addition to writing, he is an avid reader and hockey player. For more information, please visit jeffschober.com.

For more information on NFB Publishing, please visit www.nfbpublishing.com. You can also follow NFB Publishing on Facebook at www.facebook.com/NoFrillsBuffalo for frequent updates.

NFB Publishing to publish novel on the Rhodesian Bush War

Plummet and Shine is latest release from NFB Publishing

‘Fewer Than 9’ is the latest book release from NFB Publishing