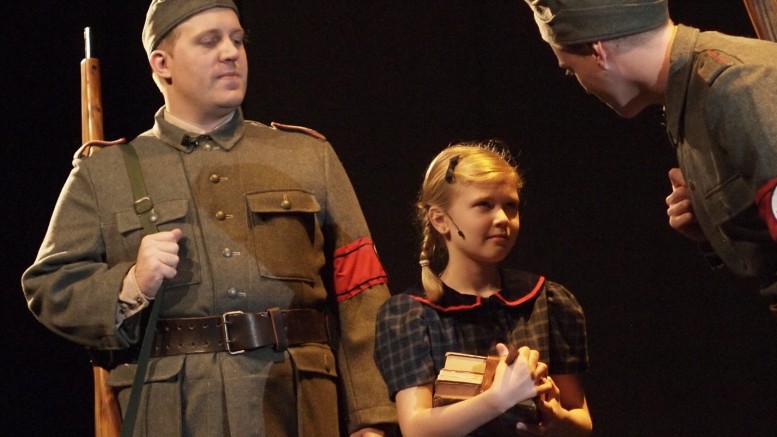 The petite blonde heard about the role through her dance teacher from Walh Performing Arts Studios in Orchard Park, where Harrington trains in tap, musical theater, ballet and jazz. Her teacher sent her to auditions for a commercial as well as for a different play at Theatre of Youth, but was not cast for either role.

The little girl with a twinkle in her eye left a lasting impression on the director for TOY and was invited to attend a callback for “Number the Stars.” The play is based on the book by Lois Lowry telling the story of a Jewish family’s escape from Copenhagen during World War II.

For the callback, Harrington said she was asked to act out the “fish shoe” scene, her favorite chapter from the book. “I read the book and basically had the ‘fish shoe’ scene memorized. I lucked out,” she said with excitement. “I was really nervous but it was really fun.”

The show’s artistic director, Meg Quinn, decided to cast Harrington and one other girl to split the role of Kirsten.

“At first, since I didn’t know much about acting, I got mixed up and thought ‘cast’ meant she was going to re-audition me,” Harrington said. After talking to her mom, she realized she got the role she wanted and was filled with joy. “I started screaming!”

Kirsten is a lot like Harrington in terms of their personalities, which made her first professional gig even more enjoyable. “She’s the funny one. She’s the one that’s not quiet and serious,” she said with a smile. Her role also connected with her home life. “I don’t have an older sister but I have two older brothers. I’m a real ‘Kirstie.’ I’m a talkative little sister.”

Rehearsals took place for about a month before performing for a live audience. On opening night, Harrington earned the nickname “Nervous Queen” because she was pacing back and forth before taking the stage. After reciting her first two lines, she said she became the character and was no longer nervous.

Some of the performances took place during school hours, but her classmates were nothing but supportive. “They were excited! I got many questions,” she said. “Their favorite question was, ‘Are you getting paid?’ ”

Being paid to live out a dream was “awesome” and Harrington is already looking for her next audition. “I’m thinking of making a living of this.”

Theatre of Youth to present Junie B. Jones in Jingle Bells, Batman Smells

Theatre of Youth to present The Lion, The Witch and the Wardrobe

Theatre of Youth to host Ghosts @ The Allendale Theatre event