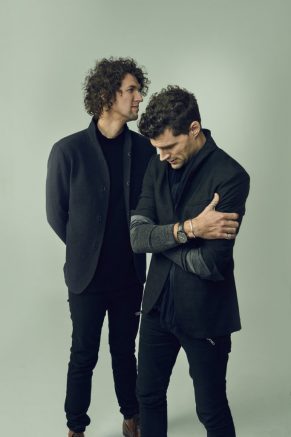 Luke Smallbone, left, and his brother Joel, will be returning to Darien Lake on July 30 to headline the third evening of Kingdom Bound.

For four days each summer, tens of thousands of people descend on Darien Center for Kingdom Bound, the Christian music and arts festival that has been a mainstay in the region for more than three decades.

Kingdom Bound devotees will have more than 50 musical acts and speakers to choose from this year including Grammy winners, for King and Country. The Australian duo takes the stage at the Darien Amphitheater Tuesday night.

I spoke with for King and Country’s Luke Smallbone last summer as the band prepared for Kingdom Bound 2018, and he offered up his thoughts on what makes this annual Western New York tradition so unique.

“Part of what makes Kingdom Bound so special to us, is that it was one of the first festivals my brother Joel and I ever played,” Smallbone recalled. “We have played Kingdom Bound more than any festival in America. It is a wonderful event — I mean, who doesn’t want to go to an amusement park and then experience the music at the same time?”

Attendees have the option of buying a single day ticket or a wristband to attend all four days of the festival. Both include admission to the Six Flags Darien Lake Amusement Park and Waterpark. Other highlights of the festival include:

• North Point Inside Out

• for King and Country

Festival Director Donna Russo says the annual event is much more than just arts and entertainment.

“There are many of us who attend the festival who need a gentle push to realize that God makes deposits in us calling us to invest back into our world and the people in it,” Russo says. “It is that investment through serving others that changes lives.”

For more information or to purchase tickets, please visit www.kingdombound.org.

Matt Chandler is a freelance writer and children’s book author from New York. Follow him on Twitter at @WriterInBuffalo or visit www.mattchandlerwriting.com.

Be the first to comment on "Kingdom Bound returns to Darien Lake; Christian music and arts festival begins July 28"