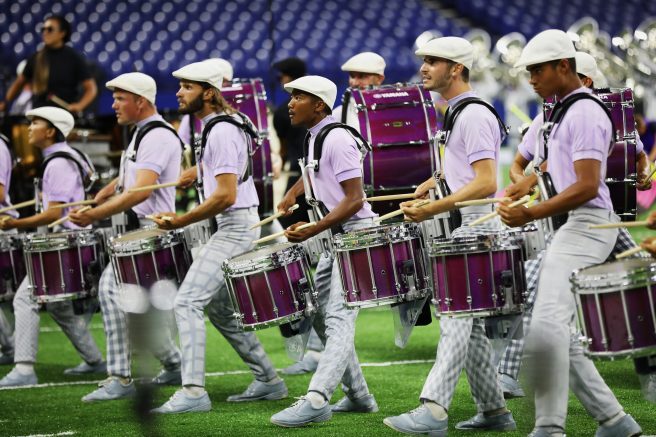 Nine of the top drum corps in the world are coming to Western New York for the 22nd annual Drums Along the Waterfront — Tour of Champions, Western New York’s premier “music in motion” event, at 6:30 p.m. Sunday, Aug. 4 in New Era Field. Eight local high school and one college campus will play host to these skilled out-of-town performers during their visit.

Following is a list of housing assignments for the nine drum corps. Rehearsal schedules will be released and posted the week of the show at www.DrumsAlongTheWaterfront.org.

Bluecoats of Canton, OH:
Saturday, Aug. 3 at Orchard Park High School
Sunday, Aug. 4 at New Era Field (rehearsals closed to the public)
The Bluecoats are currently undefeated in 2019 DCI competition. The organization was founded in 1972 as an outreach program of the Canton, Ohio Police Boys’ Club. The corps’ name was chosen in tribute to the city’s retired police officers. Making its competitive debut in 1974, fans traditionally welcome the corps to the field with a signature cheer of “Bloo!” The corps has finished in eighth place or better since 2001, winning their very first DCI World Championship title in 2016.

Blue Stars of La Crosse, WI:
Saturday & Sunday, Aug. 3-4 at West Seneca East High School
Founded in 1964, Blue Stars was the silver medalist at the 1972 Drum Corps International World Championship, finishing just over a half point away from winning the inaugural event. Competing as an Open Class unit for much of the late 1980s, ’90s and early ’00s, the corps won the World Championship title in its class in 1989, 1993, 2001 and 2003. Blue Stars began competing among DCI’s World Class ranks again in 2006.

Boston Crusaders of Boston, MA:
Sunday, Aug. 4 at Eden High School
Boston Crusaders was founded in 1940 as the Most Precious Blood Crusaders. Separating from the church parish that sponsored the group in its early years, the corps became the Hyde Park Crusaders and later the Boston Crusaders as it established itself as a national powerhouse. A charter member of Drum Corps International in the 1970s, it would not be until 1999 that Boston skyrocketed into the DCI World Championship Finals. The corps has retained its spot among DCI’s elite Top 12 ever since.

Carolina Crown of Fort Mill, SC:
Sunday, Aug. 4 at SUNY-Erie Community College, South Campus, Orchard Park
The Carolina Drum Corps Association was founded in 1988 with the goal of bringing a drum corps to the Carolinas. The founders had their dream realized with the birth of Carolina Crown the following year. The corps won the DCI Division II Championship in 1993, joining the ranks of the World Class the following year. Carolina Crown has been a finalist every year for the last decade, earning its first World Championship title in DCI’s World Class division in 2013. The organization celebrates its 30th anniversary in 2019.

Colts of Dubuque, IA:
Sunday, Aug. 4 at Dunkirk High School
Founded in 1963 as the Junior Dukes, Colts was previously known as the Legionnaires and Colt .45 before adopting its current name in 1976. Since 1993, the corps has placed in the DCI World Championship Finals numerous times, most recently in 2007. In addition to both a World Class and an Open Class drum corps, the Colts Youth Organization also sponsors a summer band for students in fourth through eighth grades. The governor of Iowa has proclaimed the Colts “Iowa’s Ambassadors of Music.”

Mandarins of Sacramento, CA:
Sunday, Aug. 4 at Springville High School
Founded in 1963, the Mandarins organization has long been known for blending Asian traditions with drum corps. The corps has been a DCI World Champion in its class eight times, including an unmatched string of four titles as a Division III unit between 1996 and 1999. Mandarins started competing as a World Class corps in 2003 and earned a spot as a DCI World Championship finalist for the very first time in 2018.

Phantom Regiment of Rockford, IL:
Sunday, Aug. 4 at Pioneer High School
Founded in 1956 as the Rockford Rangers, the Phantom Regiment is a two-time DCI World Champion (1996, 2008) and has been a DCI World Championship Finalist every year since 1974. Always staying true to its classical music identity, the corps has thrilled audiences for more than six decades with the complexity and grandeur of timeless music and the sheer explosive power that can only be described as Phantom Regiment,

Tickets for “Marching Music’s Major League” event are now available and are priced from $29 to $55. Tickets for children 12 and under are half price, and discounts are also available for seniors, military and groups. To purchase tickets, please visit www.DrumsAlongTheWaterfront.org. For group tickets, please call (716) 949-1262. Please note that the box office at New Era Field is open from 9 a.m. to 5 p.m. Monday through Friday. Parking at the event is free and lots will open at 3 p.m. Stadium gates will open at 5 p.m.