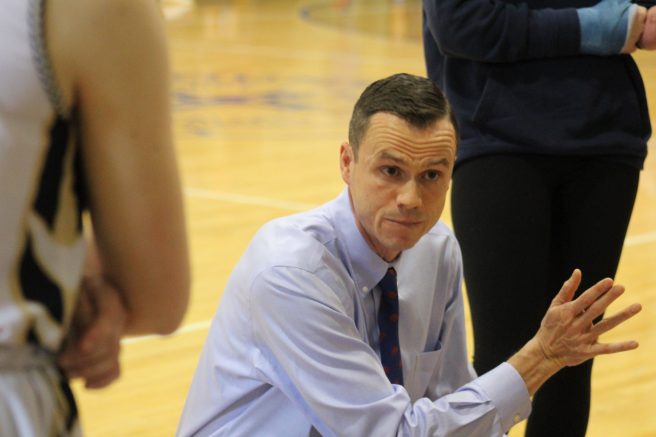 After coaching 29 different seasons, including 13 in basketball and eight in both soccer and tennis, longtime Mount Mercy Coach John Glose has announced that he will not be returning to coach at Mount Mercy next season.

“I’m stepping down to spend more time with my wife and three young children. It has been an absolute pleasure and joy to coach the Mount Mercy athletes. There is nothing like the Mount Mercy athlete; the work ethic, toughness, and resiliency is amazing and unmatched! I have learned so much from the wonderful young ladies I’ve coached,” Glose commented.

A West Seneca resident, Glose began his coaching tenure as Mount Mercy’s JV basketball coach and when the varsity coaching position was vacated in 2013, he stepped into that role with the same enthusiasm that he brings to everything he does.  He has helped many girls who walked through the doors of 88 Red Jacket not only become better athletes, but also to be better people. He helped his players hone their skills, and pushed them to be their personal best on and off the court.

Glose’s hard work and passion for sports brought much success to Mount Mercy Athletics. The Magic were Basketball State Champions in 2009 and 2014, Monsignor Martin Basketball Champions in 2014, and also won numerous tournament championships in both basketball and soccer. Glose started the Mount Mercy Basketball Camp in 2009 and will conduct his 12th this year at Mount Mercy from June 28-July 1. Longtime Assistant Coach Paul Crowley helped Glose build a great partnership with St. Mary’s School for the Deaf, which enabled them to start SMSD Basketball Clinic in 2010.

“What I’m most proud of is we did things the right way here at Mercy,” Glose recalled. “All 29 seasons we competed with sportsmanship, class, and respect towards everyone. What I will miss most is the relationships I have built throughout the years with players, coaches, and the players who became coaches. I want to thank Mount Mercy Academy for giving me the opportunity to be their coach and for all of the support from throughout the years.”

Although Glose will no longer be the voice in the huddle for the Magic, the traditions and memories he helped create will certainly live on. Mount Mercy wishes Glose and his beautiful young family nothing but happiness in whatever the future sets before them.