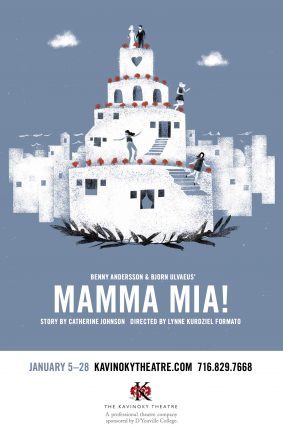 The Kavinoky Theatre, a professional theatre on the campus of D’Youville College, continues its 38th season with Benny Anderson and Bjorn Ulvaeus’ Mamma Mia! (story by Catherine Johnson).

Director/Choreographer Lynne Kurdziel Formato returns to direct after the Curtain Up! popular hit musical The Producers. Mamma Mia! is the international smash hit ABBA musical about a daughter’s quest to discover the identity of her father on the eve of her wedding. She brings back three men from her mother’s past, with the story told through the songs of ABBA.

The Kavinoky will be incorporating a new scenic element into the production: LED “curtains” made possible by a grant from the Community Foundation for Greater Buffalo, with funds from its J. Warren Perry and Charles Donald Perry Memorial Fund. These light-emitting panels have the capability of displaying photo-realistic computer-generated images or video anywhere on the stage. The Kavinoky is the first theatre in WNY to use this LED screen technology to enhance its already award-winning scenic designs. From crashing waves on the beach to disco lighting, this new audience experience will be a highlight of this record-breaking ABBA musical.

Performances for this four-week engagement (Jan. 5-28) will take place on Thursdays and Fridays at 7:30 p.m., Saturdays at 3:30 and 7:30 p.m., and Sundays at 2 p.m. The gala opening night performance will be held on Friday, Jan. 5 at 7:30 p.m. and includes a catered wine reception with the cast following the performance. Tickets are $42, with discounts available to seniors, students, military and groups. For tickets, please call 829-7668 or visit kavinokytheatre.com.

Kavinoky Theatre to present To Kill A Mockingbird

Be the first to comment on "Mamma Mia! coming to the Kavinoky Theatre"