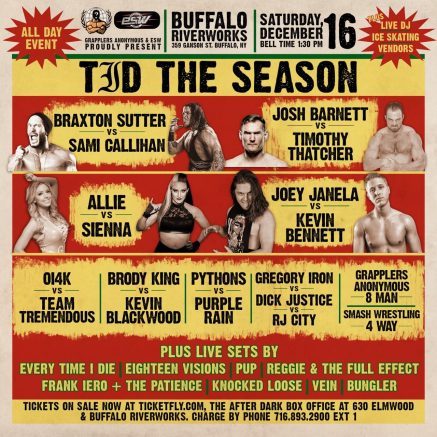 Empire State Wrestling (ESW) will be working in conjunction with the popular band Every Time I Die (ETID), local wrestling school Grapplers Anonymous (GA) and Canadian wrestling promotion SMASH to put on the very first Rock & Wrestling show in Western New York History. This special event will be held at Buffalo RiverWorks, 359 Ganson St., Buffalo, on Saturday, Dec. 16. Gates open at 1 p.m. for this all ages, all-day event, and a limited number of tickets are available.

Ten matches are booked for the event. Impact Wrestling star and West Seneca native Braxton Sutter will face Combat Zone Wrestling’s Sami Callihan. Sutter has been on one of the most impressive winning streaks in ESW history, picking up notables victories over Ethan Carter III, Silas Young and Davey Richards, among others. Callihan is a former NXT star and also appears regularly on Lucha Underground.

In a match showcasing two of America’s top high-flying wrestlers, North Tonawanda native Kevin Bennett will face CZW star Joey Janela. Bennett has posted several impressive victories this year in ESW, including over ex-World Wrestling Entertainment star Super Crazy and EVOLVE’s Jason Kincaid. This will be Janela’s first match in Western New York; he has wrestled extensively across the U.S. for many top independent promotions.

ETID guitarist Andy Williams will wrestle his first match in Western New York as a part of the Pythons tag team. They will take on Purple Rain, which consists of former Ring of Honor (ROH) star Cloudy and Cheektowaga native Anthony Gaines.

The headlining band and host for the event will be Buffalo’s hardcore heroes Every Time I Die. ETID’s Christmas show is now an annual tradition that has increased in popularity over the years. The event has been held at previous smaller venues in Buffalo such as Mohawk Place and Town Ballroom and has now sold over 3,000 tickets for this year’s show at RiverWorks. ETID is continuing to promote their eighth album, Low Teens, which was released last year.

Eighteen Visions re-formed this year after breaking up 10 years ago. The Orange County, California band is best known for its single “Victim” which came off their self-titled release in 2006. Eighteen Visions are touring in support for their newest album XVIII that came out in June.

ESW promotes eight shows a year, primarily held at the St. Johnsburg Fire Hall in North Tonawanda, boasting crowds of over 400 wrestling fans, who come to cheer the good guys and boo the bad guys of the sport. Larger “super show” events have been held at the Kenan Center in Lockport and the Frontier Fire Hall in Niagara Falls, drawing crowds of up to 1,000.