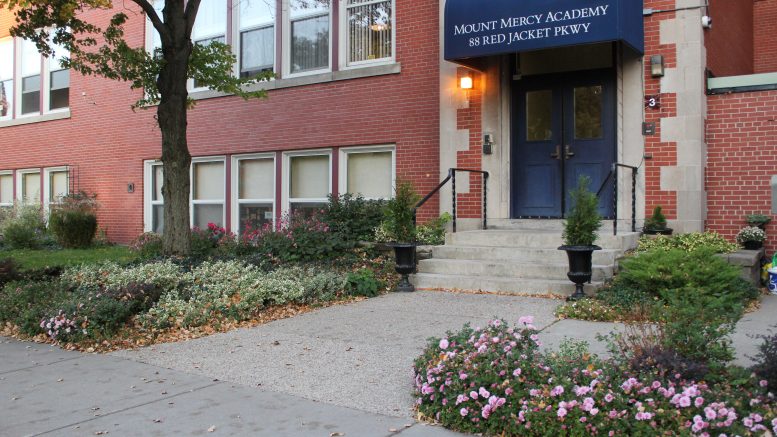 Mount Mercy Academy is extremely happy and fortunate that South Buffalo resident Cathy Hetzler decided to pursue another career after she retired from her employment with the Buffalo Board of Education. Hetzler has used her talents to dramatically alter and enhance the landscaping in front of Mount Mercy Academy. Her efforts have resulted in an appearance that has improved the school and the neighboring area.

Two years after she retired, Hetzler decided to become a Master Gardener. She enrolled in the program which is sponsored by the Cornell University Extension Service. The program met one day a week for 10 weeks and taught her the basics of gardening.  The program prepares Master Gardeners like Hetzler to volunteer to educate homeowners about the science of horticulture and requires them to continuously educate themselves in the field.  n addition, Master Gardeners must volunteer hours of service each year. Hetzler has attended many gardening classes, workshops, conferences and eventually she began to give gardening presentations. She uses her master’s degree in librarianship to increase her gardening knowledge base.

Hetzler definitely has a passion for gardening which she suspects started when she was growing up. She lived in a house that her family shared with her cousins and her uncle.  Hetzler remembers that her uncle, a gardener from Italy, grew wonderful vegetables in their backyard. Her love for gardening remained dormant until her children were grown and she became interested in changing the traditional landscaping around her house.

Before Hetzler became involved six years ago with her work at Mount Mercy, she completed several other volunteer projects. Her first project was working with a woman who was maintaining four community gardens in Buffalo’s Fruit Belt area. She then spent 10 years working at the Mercy Center, planting the foundation beds around the building after the Mercy Center’s major reconstruction. The reconstruction had removed all of the existing landscaping. After a trip to Japan, she worked at the Japanese Garden in Delaware Park for two years, putting into practice the gardening principles that had intrigued her on her trip. She also volunteered at the Botanical Gardens and in addition to volunteering at Mount Mercy, she is currently maintaining a landscape that she developed at Grace Lutheran Church on Cazenovia Street.

Cathy Hetzler clearly remembers how she became involved with the Mount Mercy grounds makeover. She was at a meeting with Sister Shelia Marie Walsh who told her that Sister Mary Ellen Twist, Mount Mercy’s president at that time, was thinking of planting another tree in front of the school. Sister Mary Ellen wanted Hetzler’s advice.  “My reaction was OH NO!” Hetzler remembered.

She then met with Sister Mary Ellen and explained her reasons as to why adding a tree would not improve the grounds. At that time, there were about 24 evergreen shrubs pruned into squares along the foundation on the left side of the building. Three areas had been commercially landscaped and there were also two building-high Blue Spruce trees in the lawn. In addition, the electronic sign had recently been installed. Hetzler told Sister Mary Ellen that the grounds needed a complete makeover.

Hetzler was given the green light to put her green thumb to work to beautify the landscaping in front of the school. She came up with some broad principles, met with representatives from Mount Mercy and began her mission “to change the front of the school from looking like an institution into a school for beautiful young ladies.”

The first year was mainly filled with deconstruction of the existing grounds. She encountered multiple design challenges. The lawn was too small in proportion to the height of the building and the dark shrubs at the foundation made the lawn look even less deep. As a result, the shrubs were removed and the two Blue Spruce trees were also removed since they were diseased and much too large. To give the illusion of a deeper lawn, lighter plants were planted up against the building and the beds were made to have some depth by layering the rows of different plants. To break up the long, straight line of the building, Hetzler “bumped out” some areas creating spaces for different types of plants.

In order to reduce the expense and time of maintaining such a large tract of landscape, Hetzler added mulch every year and began to grow ground cover in order to reduce the need for mulch. She also needed to plan her blooms around the school year. It was necessary to find and plant items which would bloom in the spring and fall.

The electronic sign also provided a challenge for Hetzler. She had heard there was unhappiness about the “naked” look of the sign. So, in order to make the sign blend into the landscape, it required Hetzler developing plantings on the convent side of the sign, as well as the sign’s backside.

Hetzler was able to keep the costs down for the extensive reworking of the grounds through her network of fellow gardeners. She estimates that almost 75 percent of the plants were obtained at no charge, including many seedlings, cuttings and transplants from her own garden.

A final obstacle that she had to face was watering. With only two water spigots at the far ends of the buildings and hoses that were heavy and bulky, watering was an immense challenge. Once again an acquaintance from her gardening world helped. He created and donated a makeshift system to bring water to the flagpole area. This system, along with the purchase of lighter hoses, made watering, which was especially difficult during this summer’s drought conditions, a little easier for Hetzler. She watered four nights a week this summer to keep the plants alive for the start of school.

There are many components of gardening that Hetzler enjoys. She derives much pleasure from watching the growth process unfold. “Observing a seed turning into a magnificent flower is indeed watching a miracle happen,” Hetzler commented. “I love learning new things about gardening. There is no end to the learning. I am currently researching how to grow a colchicum and I hope to have some at Mount Mercy next year.”

Hetzler also enjoys the smiles on the faces of the Mercy Hospital workers who pass her house walking to and from work. They often tell her how much they enjoy looking at her garden as they pass by each day. Although many may consider gardening to be difficult and hard labor, Hetzler views the actual work as a time of total relaxation.

Hetzler’s gardening efforts have not gone unnoticed or unappreciated. Each year, the three gardens she currently maintains are included in the South Buffalo Garden Walk.  Her personal garden is usually recognized by the Buffalo in Bloom program.

Despite all the hours of labor and the wonderful new look, her efforts at Mount Mercy are still a work in progress. “I think I have succeeded in changing the face of the building. I don’t think the school has the “red brick institution” look anymore. A casual observer might considered it finished, but I still have a to do list,” Hetzler concluded.

Mount Mercy has truly been blessed and its grounds have been revitalized and beautified by the dedication, hours of labor and expert knowledge of its volunteer Master Gardener, Cathy Hetzler!