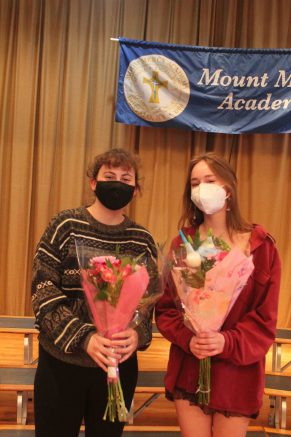 Mount Mercy Academy Head of School Michele Melligan recently named the valedictorian and salutatorian for the Class of 2022. Sydney Gunner and Aubrey Monaco were honored for their outstanding four-year academic records.

Gunner, the daughter of Mr. and Mrs. David Gunner of East Aurora, finished her four years with the highest cumulative average earning the right to be the valedictorian for the Mount Mercy Academy Class of 2022. Gunner is a member of the Health and Science Academy and is a student ambassador. In addition, Gunner is the editor of the Mercienne, the school yearbook, and is also editor-in-chief of the Merciette, the school newspaper. She is also a member of the McAuley Chapter of National Honor Society and a McAuley Scholar. In addition, she has been a part of the Buffalo Scholastic Rowing Association for the past four years. Gunner plans to attend Smith College in the fall to study neuroscience on a pre-med program track.

Monaco, the daughter of Mr. and Mrs. Alfonse Monaco of Buffalo, completed her years at Mount Mercy with the second highest overall average in the class and was named as the Salutatorian for the Class of 2022. Monaco is president of the Environmental Club, has participated in the Envirothon for the past two years, is a member of the National Honor Society and the Health and Science Academy, and a McAuley Scholar. She has also been on the track team for four years and is a member of the Mercienne yearbook main staff and a member of the Merciette newspaper staff as well. Monaco will attend the University at Buffalo and intends to major in environmental geosciences and minor in social justice.