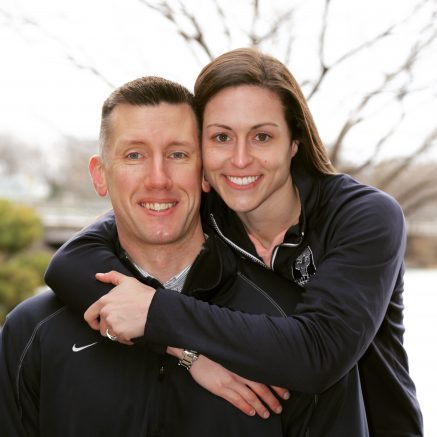 While at Mount Mercy Academy, Melissa Graham Kuberka (Class of 2009) was recognized as a talented student-athlete. She won multiple honors in athletics, including Senior Athlete of the Year, and academically was the salutatorian of her class. Her academic and athletic prowess continued at the State University of New York at Geneseo. Kuberka, a former resident of Orchard Park,  credits her time at Mount Mercy with providing her a strong base for both academics and athletics.

“I decided to attend Mount Mercy’s open house because my cousin was a student there and she encouraged me to visit. After taking the tour I knew that I wanted to be part of the school because of how she interacted with her teammates and teachers. The teachers and coaches seemed genuine and personable while Mercy’s curriculum presented a challenge that would prepare me for college,” Kuberka commented.

Kuberka played three varsity sports — soccer, basketball and lacrosse — and earned a varsity letter in all three sports during each of her four years. Her athletic experience provided her with valuable life lessons.

“Mount Mercy allowed me to play three varsity sports as a freshman and even though I spent most of my first basketball season on the bench I was motivated to get better. That offseason I pushed myself harder than I ever had and the reward was a Monsignor Martin championship as a sophomore, “

Kuberka remarked. “I learned the value of hard work and the importance of commitment quickly.”

In addition to athletics, she was also active in activities at Mount Mercy, including SADD, Donate Life and yearbook. She was the co-editor of the yearbook and was vice president of her class, as well as a member of National Honor Society and a perennial name on the honor roll.

Kuberka credits her teachers for helping to develop her academic talents. “I believe my teachers wanted me to be successful and did not allow me to cut corners. I look back on my English, biology and calculus teachers as being the ones who built me as a student. There were a few teachers in particular who valued the Catholic tradition and they became role models for my own faith. Seeing teachers at church on the weekend was a reminder that they practiced what they taught,” Kuberka stated.

The Advanced Placement Program at Mount Mercy allowed Kuberka to enter college with 21 credits. She took Advanced Placement classes in World History, U.S. History, Calculus, English Language and Composition, English Literature and Composition, and Biology. Although she did not take AP Spanish, she was able to pass the entrance exam to receive credit for a Spanish class.

“The AP classes I took allowed me to skip those same classes at Geneseo which is what allowed me to pick up two minors and take other classes that intrigued me. Mercy forced me to learn to manage my time with academics, athletics and extracurricular activities which ultimately prepared me for Geneseo,” Kuberka said.

Attending Mount Mercy Academy, a single-sex school, was a definite positive for Kuberka. “Since I spend a lot of my time working with college basketball players, I have learned how important their high school experiences are to shaping their success in college. My experiences at Mount Mercy definitely helped me to be successful. I didn’t have to think about what I wore or what my hair looked like because I was going to class with my friends and not trying to impress anyone. But more importantly, whenever projects came up we had to take initiative to complete them. We as women were empowered to rise to challenges and ultimately to be leaders because there were no male peers to step in that role. My independence and confidence in myself came from being in an all-female environment,” she noted.

While at Geneseo, Kuberka continued her basketball career, playing all four years and earning many honors along the way. In 2011 she helped lead her team to the SUNYAC Championship and was voted to the All Tournament team. In 2012 she was an All-Conference Selection and in 2013 she was the SUNYAC Player of the Year and a WBCA All-American.

She also earned academic honors on her way to a bachelor of science degree in biology and minors in psychology and environmental science. She was on the Dean’s List seven times, was on the SUNYAC All-Academic and Commissioner’s Lists and in 2013 was a recipient of the SUNY Chancellor’s Award for Student Excellence. She was also selected for the Tribeta National Biological Honor Society and the National Residence Hall Honorary.

“I am glad I was able to form some foundation for my world views in an all-female environment because in college I was able to reevaluate those views and incorporate some opinions and beliefs by men in my classes,” Kuberka stated. “However, I also was able to listen to their views and politely disagree based on my own experiences and I was not afraid to have a differing opinion. My confidence to have my own ideas but also to be considerate of others’ views was built in a comfortable environment at Mount Mercy. This prepared me for life.”

After graduating from Geneseo in 2013, Kuberka attended the University at Buffalo. She intended to get a master’s degree in epidemiology (causes of health outcomes and diseases) but after two semesters she decided to change her focus. While attending school she also served as State Senator Patrick Gallivan’s agricultural policy advisor, a position she still holds today.

As she continued to pursue her degree, Kuberka began to coach.  While coaching she decided that coaching was a path she wanted to pursue and switched her program and obtained her master’s degree in clinical psychology with a focus on aggression and impulsivity in athletes.

Kuberka began her coaching career at her alma mater, Mount Mercy Academy. She was a varsity assistant coach in both soccer and basketball before being challenged to be the head coach for lacrosse, a team which had not won a game in three years.

She helped lead the basketball team to a state championship in 2014 and a second place finish in the Monsignor Martin League in 2015. In her first year (2014) as the lacrosse coach the team won four games and in her second year (2015) the team finished in third place. Due to a change in her responsibilities, she stepped down as the head coach of lacrosse and became the assistant coach. In 2016, the Mount Mercy Lacrosse team won its first ever Monsignor Martin League Championship.

In the fall of 2015, Kuberka was hired as the women’s basketball coach for Hilbert College, a program that had won 10 total games in the three previous seasons. Her first team won 11 games and in her second season the team also won 11 games and qualified for the AMCC playoffs for the first time in over 10 years. She also became the assistant lacrosse coach in 2016 and then when the coach suddenly resigned, she took over the program in 2017 and led the team to a four-win season, the most in school history. She was named the AMCC Coach of the Year for lacrosse in 2017.

Last fall Kuberka accepted a position as the head women’s basketball coach at St. John Fisher College. In her first year at the helm she led the team to a record of 21-6, finishing second in the Empire 8. Kuberka is looking forward to her second season with great excitement and anticipation.

“Mount Mercy took a chance on me, an alumna, and allowed me to be part of their athletic department as a coach and that spring-boarded me into the greatest job in the world at St. John Fisher. Mount Mercy was the right choice for me because opportunities were presented and there were people supporting me if I decided to take on a challenge,” Kuberka concluded.