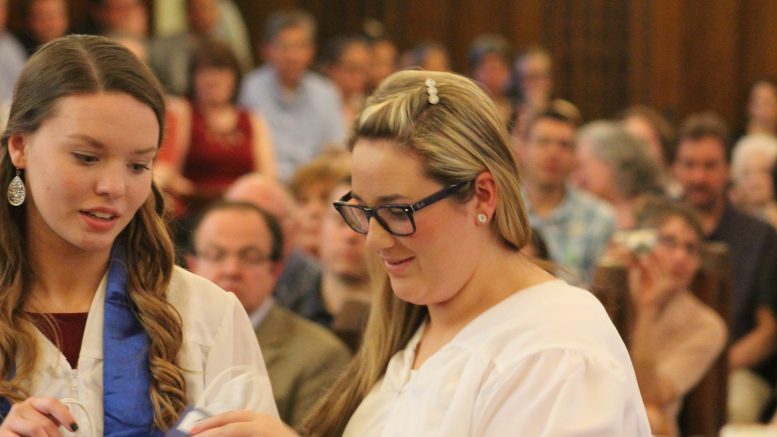 Mount Mercy Academy’s 111th graduating class recently held their Baccalaureate Mass and Awards Ceremony at the Regional Sisters of Mercy’s Chapel. The evening began with the class sharing its last mass together and concluded with the recognition of student accomplishments, the presentation of special awards and culminated in the announcement of all the academic monies earned by the Mount Mercy Class of 2016.

Catherine Rogers (Cheektowaga) delivered a reflection during the mass during which she highlighted how her faith has grown and developed as she became a woman of Mercy. Rogers urged her classmates to continue to be women of Mercy.

Gifts, medals or certificates were distributed to the officers of various clubs, the editors of the school publications, members of the music department who participated for either three or four years, as well as the members of mock trial and the oratory and debate.  Also recognized were the students with perfect attendance during their senior year.

Three students were commended by the Mathematics department. Dedloff received acclaim for her outstanding achievement in the field of mathematics throughout her four years. She achieved mastery on all of her Regents exams and this year took two math AP classes at the same time. Rogers and Stephanie Evaniak (Buffalo) were honored for achieving mastery in all of their math courses and for taking an AP math class as well as another math class this year.

The Science Department recognized four students for their interest, dedication and scholastic effort in each of the four Regents science classes. Miller was honored for Living Environment, Radwan for Earth Science, Fabian for Chemistry and Rogers for Physics. Additionally, the Science Department lauded Dedloff for her interest, dedication and scholastic effort in the field of science.

The Art Department lauded Kaylee Bauer, Victoria Brown and Sarah Zulawski of Buffalo and McKenzie Cerrone of Colden for their superior level of academic and creative achievement in art due to their interest in art-making, their pursuit of alternative approaches to problem-solving and their exceptional work ethic. Tara Kennelly and Natalie White of Buffalo, Rebecca Rozeski of Orchard Park, Jessica Teibel of Williamsville and Karczak were recognized for outstanding creativity and effort in Digital Photography and Media.

The National Choral Award is presented to the students who have made the greatest contributions to the vocal program. Sharing the award this year were Laurel Bodensteiner and Grace Greenan of West Seneca and Rebecca Pinterpe of Buffalo.  Fabian earned a special award for being the only student in the 24-year history of Magic Belles Handbell choir for all four years.

McAuley Scholars are those students who through their career at Mount Mercy Academy maintained a minimum of a 95 average. These students are required to take at least two AP or college level courses beginning in their sophomore year. The McAuley Scholars from the Class of 2016 are Dedloff, Fabian, Keane, Krasner, Miller, Radwan, Rogers, Rozeski, and Zulawski.

The Elizabeth Ann Seton Award was given to Elizabeth Kwiecinski (Buffalo) and White who displayed kindness, thoughtfulness and humility to their classmates.

Uebler was praised for maintaining perfect attendance for all four of her high school years.

Sarah O’Shei of West Seneca was named the recipient of the Amy Getty Award which is given to a senior who is dedicated to helping her classmates achieve their best self while working to develop her own skills and talents while at Mount Mercy Academy. The words character, integrity and compassion describe the recipient.

Rogers was the winner of the Daughters of the American Revolution Good Citizen Award which is given to a student who has demonstrated the qualities of dependability, service, leadership and patriotism.

Teibel earned the Service Award for extraordinary commitment to service work, both in her school and community. This student has demonstrated incredible work ethic and dedication in serving the needs of those around her.

The entire senior class was recognized for successfully completing the Leadership Program, a program offered to students to learn more about varied aspects of leadership because it is one of the five hallmarks of a Mercy education.

The Triple C Award is awarded to the young women who have demonstrated continuous character, courage and commitment over their years of high school. For overcoming obstacles and exhibiting the strength of character to successfully achieve their personal and academic goals, Anna Allman (Orchard Park), Yolanda Kalinowski (Buffalo) and Abigail Zdrojewski (Lackawanna) were recognized.

Erin Donovan (Buffalo) was named the recipient of the St. Aloysius Award which is presented to a student who has displayed personal growth and potential during her senior year.

Anderson was recognized as the winner of the 2016 Community All-Star Award from Independent Health which recognizes a student who has made a positive difference in the lives of people here at school and in the community.

Mount Mercy has prepared graduates to live, learn and work in a global society. Mount Mercy opens its doors to students from different parts of the world to learn from them, and to share with them our culture and values. Zixian (Viola) Zeng of China was awarded a certificate of completion of a rigorous course of study at Mount Mercy Academy.

Caeley Robinson of Buffalo was given the St. Kateri Award, an award named for the Patron Saint of ecology and environment, for her dedication to the critical concern of reverence for the earth, and for raising our awareness regarding environmental issues and reducing our individual impact on our fragile environment.

The Ryan Purcell Memorial Foundation was established in 2012, in honor of Ryan Purcell, whose life came to a tragic end. Ryan was a well liked and compassionate student, who through tireless efforts devoted his short life to empowering other student to believe in themselves and reach their full potential, both in and out of school. Ryan’s family awarded two students, who instill much of the same admirable qualities that he did, with a scholarship. On behalf of Dr. Peter and Lisa Purcell and their family, Mount Mercy was honored to present the Ryan Purcell Memorial Team Spirit Scholarship to Jessica Teibel and Sarah O’Shei.

The Senior Athlete Award was given to Balys, the senior who exemplifies not only athletic ability but sportsmanship, leadership and character. During her four years at Mount Mercy Academy, this young woman excelled in at least two sports and was recognized by her coaches, teammates and other individuals within the Monsignor Martin League.