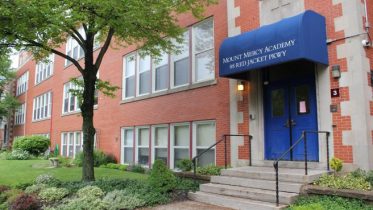 On Monday, May 24, Mount Mercy Academy’s 116th graduating class held its Baccalaureate Mass and Awards Ceremony at Our Lady of Victory National Shrine and Basilica. The evening began with the class sharing its last mass together and concluded with the recognition of student accomplishments, the presentation of special awards and culminated in the announcement of all the academic monies earned by the Mount Mercy Class of 2021.

Emily Rhoads (Orchard Park) delivered a reflection during the mass during which she highlighted how she has grown and developed as she became a woman of Mercy. She commented that she believes that she and her classmates have been empowered through their Mercy education to make a difference in the world. Rhoads thanked those who have aided her along her journey, including her friends and classmates, her family and her teachers. She is confident that she and all of her classmates are ready to venture out into the world and she cannot wait to see what they all become in the future.

Gifts, medals or certificates were distributed to the officers of various clubs, the editors of the school publications and members of the music department who participated for either three or four years. Recognized for perfect attendance during their senior year were Lara Groves of Lakeview, Claire Mullen of Orchard Park, Megan Quinn of Hamburg, and Megan Reilly and Mary Snyder of Buffalo.

The Mount Mercy Science Academy provides an advanced academic track for students interested in health/science professions, which exceeds the NY State Regents program. Seven students have completed a four-year journey which has included a rigorous course of study, attending experiential field trips, learning from the advice and guidance of guest speakers in the medical sciences, rotations of shadowing healthcare professional at Mercy Hospital, 30-hour internships, and written work reflecting these experiences. Kathryn Bednarz and Madeline Lickfeld of Buffalo, Aislinn Farrell, Olivia Jarosz and Emily Kessler of West Seneca, Gianna Lauciello and Emily Rhoads of Orchard Park, Megan Jozwiak of Springville, Angelina Larivey of Lackawanna and Groves and Quinn have completed all components of the Mount Mercy Science Academy program and have earned a white lab coat signifying their accomplishments.

The English department recognized Victoria Trzaska of Buffalo and Kessler who showed dedication and excellence in their English courses by demonstrating a high level of maturity and thoughtfulness in reading and writing. They consistently exceeded expectations and strove for mastery in all tasks. Hannah Vattes of Buffalo was recognized for displaying a genuine love for reading by expressing interest and engagement in her English courses.

The Social Studies department recognized Anani Debose of Buffalo and Lickfeld for their interest in and appreciation of history and the social sciences.

Six students were recognized for their achievements in the Women in Social Sciences Academy, a program designed to encourage students’ interests in the Social Sciences.Laila Aloi of Orchard Park, Keira Olsen of Buffalo, Debose, Rhoads, Trzaska and Vattes have completed requirements of the Academy through a combination of coursework and field experiences.

The mathematics department presented awards to two students who have shown great dedication and interest in the field of mathematics and have demonstrated outstanding achievement not only in their courses, but also on the New York State Regents Exams. Rhoads and Vattes were recognized for their efforts.

The Languages other than English department recognized two seniors. The award was presented to students who have shown dedication and excellence in their Spanish IV and V by demonstrating a high level of maturity and thoughtfulness in the areas of speaking, listening, reading and writing. Groves and Trzaska consistently exceeded expectations and strove for mastery in all tasks.

The Art Department lauded three students for their achievements in art.  Trzaska was honored for her Artistic Excellence in Portfolio Preparation, Holly Miller of Hamburg was honored for her Artistic Excellence and Exemplary Work Ethic in Advanced Placement Studio in Art and Zak was cited for outstanding creativity and effort in Advanced Digital Photography and Media.

The National Choral Award is presented to the student who has made the greatest contribution to the vocal program. Earning the award this year was Quinn.

McAuley Scholars are those students who through their career at Mount Mercy Academy maintained a minimum of a 95 average. These students are required to take at least two AP or college level courses beginning in their sophomore year. The McAuley Scholars from the Class of 2021 are Rheanna Welsh of Lackawanna, Jozwiak, Kessler, Larivey, Lauciello, Lickfeld, Mullen, Quinn, Reilly, Rhoads, Trzaska and Zak.

The Amy Getty Award is presented to a senior who is dedicated to helping her classmates achieve their best selves while working to develop her own skills and talents at Mount Mercy Academy. The words character, integrity and compassion describe Debose.

The Theology and Campus Ministry Departments presented the Service Award to Debose and Trzaska for their extraordinary commitment to service work, both in their school and community. They have demonstrated incredible work ethic, enthusiasm and dedication in servicing the needs of those around them.

Mount Mercy has a proud tradition of encouraging its students to complete service hours as a way of fulfilling the legacy of Catherine McAuley. The COVID 19 pandemic has challenged our ability to participate in our normal service opportunities. However, five students have continued to find ways to contribute to their communities even with the changes. Vattes, Reilly, and Larivey have all completed more than 150 service hours during their four years. Snyder and Welsh have completed more than 175 hours of service in their four years of high school.

The Triple C Award is awarded to the young women who have a commitment to bettering themselves, their school and their Community. Their Strength of Character has helped them to achieve their goals and will guide them in making the right decisions in the future. Their remarkable Courage will aid them in meeting all of the challenges they may face ahead. Carlie Rambino of West Seneca and Miller were recognized.

Reilly was recognized as the winner of the 2021 Community All-Star Award from Independent Health which recognizes a student who has made a positive difference in the lives of people at school and in the community.

The Ronald Reagan Student Leader Award was presented to Janiah Ball of Buffalo by the Reagan Library to the senior who uses her communication skills to show compassion and leadership to her peers.

Wegmans offers scholarship opportunities to their employees who make a difference in their community, who have high standards for themselves and live up to the values of a Wegmans employee. Wegmans presented a scholarship to Natalia Weltjen of Orchard Park.

Mount Mercy’s top three students from the Class of 2021, Lickfeld, Mullen and Rhoads have received a Scholarship for Academic Excellence from the NYS Education Department. In addition, they are awarded the Erie-Niagara Scholastic Achievement Recognition Award for Outstanding Scholastic Achievement Among WNY High Schools Students.

Quinn was the recipient of The Girl Scout Educational Scholarship that was established in 1997 and recognizes the achievement and character of graduating Senior Girl Scouts who have achieved their Silver and/or Gold Award. Scholarships are awarded based on a combination of academic achievements as well as Girl Scout involvement and accomplishments.

The West Seneca Civic & Patriotic Foundation scholarship was awarded to Jarosz, a student who excels academically, participates in extracurricular activities, and enjoys community service. It is also given to a student who understands the importance of getting involved in the West Seneca community.

The Tammy Mink Memorial Award is a scholarship given by her family to a graduating senior who displays talent and dedication to the arts. Tammy overcame great obstacles to graduate from college and become a successful artist before she died at an early age. The Hughes family, who endows this scholarship, hopes Miller will use this gift to further her education in the arts.

The Senior Athlete Award is given to the senior who exemplifies not only athletic ability, but sportsmanship, leadership and character. During her four years at Mount Mercy Academy, this young woman excelled in at least two sports and was recognized by her coaches, teammates and other individuals within the Monsignor Martin League.  his year the award was shared by Hannah Fredo of Buffalo and Kessler.

Mount Mercy recognized its top 10 seniors who have excelled academically for the past four years. The top 10 in alphabetical order are: Kessler, Larivey, Lauciello, Lickfeld, Mullen, Quinn, Rhoads, Trzaska, Welsh and Zak

The 40 young women of the Mount Mercy Academy Class of 2021 earned over $9.6 million in merit-based scholarships and grants.