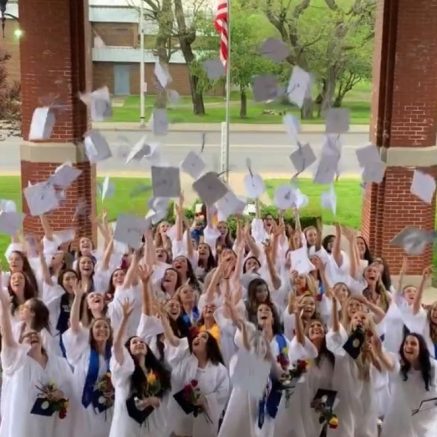 The 52 young women of the Mount Mercy Academy Class of 2020 earned over $11 million in merit based scholarships and grants.

Mount Mercy Academy Principal Margaret Staszak has announced several awards for the graduates of the Class of 2020. Awards were given by each department to the senior who was determined by that department to be most outstanding in that subject area. Also acknowledged were class and student government officers as well as recipients of other awards.

Recognized for perfect attendance during their senior year were Melanie Bebak of Cheektowaga and Jessica Shaw of Buffalo.

The Mount Mercy Science Academy provides an advanced academic track for students interested in health/science professions, which exceeds the NY State Regents program. Seven students have completed a four-year journey which has included a rigorous course of study, attending experiential field trips, learning from the advice and guidance of guest speakers in the medical sciences, rotations of shadowing healthcare professional at Mercy Hospital, 30-hour internships, and written work reflecting these experiences. Madison Baker of Lancaster, Taya Conway of Buffalo, Grace Harrington and Allysyn Pajek of Buffalo, Evelyn Nowak of Orchard Park, Caitlyn Robertson of Depew and Olivia Seifert of Lakeview have completed all components of the Mount Mercy Science Academy program and have earned a white lab coat signifying their accomplishments.

The English Department recognized Natalie Redmond of Buffalo who showed dedication and excellence in her English courses by demonstrating a high level of maturity and thoughtfulness in reading and writing. She consistently exceeded expectations and strove for mastery in all tasks

The Social Studies Department recognized Olivia Larson of Orchard Park for her interest in and appreciation of history and the social sciences.

Thirteen students were recognized for their achievements in the new Women in Social Sciences Program. They have shown interest and an appreciation for history and the social sciences and have participated in field experiences outside of the classroom. Brigid Burke, Elizabeth Higgins, Redmond, Erin Jackson, Brianna Starzynski and Krista Stephany of Buffalo; Hannah Edman and Maura Kull of West Seneca; Kathleen Hughes and Olivia Larson of Orchard Park; Violet Friedhaber of Hamburg; Chloe McHugh-Freedenberg of Lakeview and Lily Kasperek of Forestville were honored.

The Mathematics Department presented an award to Jenna Shalloe of West Seneca who has shown great dedication and interest in the field of mathematics and has demonstrated outstanding achievement not only in her courses, but also on the New York State Regents Exams.

The Science Department recognized Shaw for her interest, dedication and scholastic effort in the sciences.

The Languages Department recognized Seifert for excellence in Spanish.

The Art Department lauded Mia Mahar of Lakeview for her achievements in art. Amanda Songin of Springville and Hope Willert of West Seneca were honored for outstanding creativity and effort in Digital Photography and Media.

The National Choral Award is presented to students who have made the greatest contributions to the vocal program. Sharing the award this year were Madeline Fecio of Buffalo and Pajek.

McAuley Scholars are those students who through their career at Mount Mercy Academy maintained a minimum of a 95 average. These students are required to take at least two AP or college-level courses beginning in their sophomore year. The McAuley Scholars from the Class of 2020 are Burke, Fecio, Harrington, Higgins, Jackson, Kasperek, Larson, McHugh-Freedenberg, Nowak, Pajek, Redmond, Seifert, Shalloe, Shaw, Kathleen Ball of Buffalo;  Hannah Dierolf of West Seneca; Madelyn DiGiore of Lakeview; Jillian Kotwica of Orchard Park and Christina Zambron of Lackawanna.

The Amy Getty Award is presented to a senior who is dedicated to helping her classmates achieve their best selves while working to develop her own skills and talents at Mount Mercy Academy. The words character, integrity and compassion describe Hope Willert.

The Theology and Campus Ministry Departments presented the Service Award to Willert for her extraordinary commitment to service work, both in school and community. She has demonstrated incredible work ethic and dedication in servicing the needs of those around her.

The Triple C Award is awarded to the young woman who has a commitment to bettering herself, her school and her community. Her strength of character has helped her to achieve her goals and will guide her in making the right decisions in the future. Her remarkable courage will aid her in meeting all of the challenges she may face ahead. Bridget Whelan of West Seneca was recognized.

Nowak was recognized as the winner of the 2020 Community All-Star Award from Independent Health which recognizes a student who has made a positive difference in the lives of people at school and in the community.

The Saint Kateri Award for Environment and Ecology was awarded to Seifert.

The Senior Athlete Award is given to the senior who exemplifies not only athletic ability, but sportsmanship, leadership and character. During her four years at Mount Mercy Academy, this young woman excelled in at least two sports and was recognized by her coaches, teammates and other individuals within the Monsignor Martin League. This year the award was given to senior Tierney Ashe of Buffalo.

The 52 young women of the Mount Mercy Academy Class of 2020 earned over $11 million in merit based scholarships and grants.

Latin language is not dead at Mount Mercy Academy

Be the first to comment on "Mount Mercy Academy honors graduates"